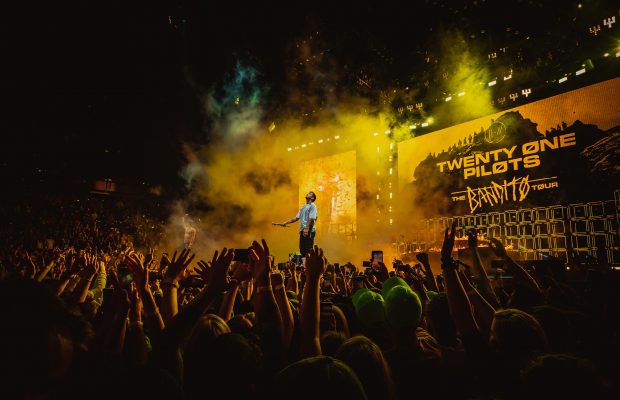 Fans, mainly teenagers and college students, started lining up nine days before the shows, to hopefully make it to the rails when doors open (the floor was general admission standing room only). I talked to a few fans in the front row before the concert started and they all assured me “the wait was absolutely worth it and my mind will be blown”.

When the lights went off, the arena was completely dark with Joseph carrying a torch on stage and both band members wearing masks. They started the night off with “Jumpsuit” and they almost blew the roof off the arena. Everyone was immediately out of their seats and dancing. Columbus gave their hometown boys the welcome they deserved and one could tell how moved they were.

During their show there was always some kind of spectacle going on. From a car on fire, to smoke effects, confetti and a huge bridge that spanned from the main stage to the B-Stage, this show had every special effect a fan would expect from an arena show.

Having never seen Twenty Øne Piløts before and not knowing too many of their songs, the show was highly entertaining and I did not get bored once.

They ended the night saying “We are Twenty Øne Piløts and so are you.” and I could not have agreed more.