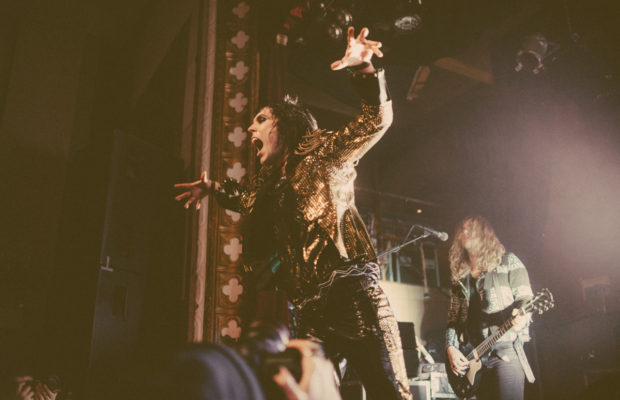 As I make my way from the subway to the the Brooklyn venue, Warsaw, I have to be very careful to avoid puddles of slush on the ground. The first snow fall of the year just so happened to coincide with my last gig of the year. The dreary weather matches my feelings of knowing that I won’t have any shows to cover for a few weeks as the holidays are fast approaching. The band I’m going to see tonight hail from the midlands of England, and they’ve been non-stop touring since the Winter of 2015. They’ve spent more of their year away from the mother-land than they’ve spent there, and tonight is also their last show of the year, before taking some much deserved time off. These English lads I’m speaking of are Derby natives, The Struts, who after covering their gig in March of this year, have become a personal favourite of mine, so I’m very excited to spend the evening basking in their glittery glory.

The venue is packed once I get inside, I overhear a conversation and it turns out tonight’s show did in fact sell out, which is always incredible to hear. I get to the venue just a bit before The Struts are due on stage, so I make my way up front to the photo area. Before the lads take the stage, a hype man of sorts comes on stage and informs us all we’re going to be filmed tonight. He tries to rile up the crowd, but this is a rock show, not a pop concert, and the crowd don’t really seem to be taking to the hype man. After what felt like hours of this man trying to get the room hyped, The Struts begin to take the stage. Drummer, Gethin Davies, walks on first, followed by bassist, Jed Elliott, and then guitarist, Adam Slack, then the lights dim a bit and vocalist, Luke Spiller, takes the stage decked out in a gold sequinned jacket. As soon as Spiller takes his place on the stage, the crowd loses their minds.

They start the set with ‘Put Your Hands Up’ which automatically gets the crowd dancing and singing along. The Struts play the kind of rock ‘n’ roll music your parents told you stories about. With remnants of David Bowie, The Rolling Stones and The Cure all rolled up into one band. The band’s energy is insane, Spiller is the kind of front-man vocalists will be emulating for years to come. He acknowledges the crowd, he interacts with his band-mates; in-fact, the whole band interacts with the crowd and each other, their personalities shine bright on stage. They continue through their set, a mix of new and older songs, and the crowd never once seems disappointed by the song choices the band has made. When they play their single, ‘Kiss This’, the crowd absolutely lose their minds. Spiller is eating up the crowd’s admiration for him, and his energy and high from being on stage is radiating off of him.

The Struts have one of the most amazing live shows I have ever seen in my life. Geth Davies is one of my favourite drummers to watch play, his talent is impeccable and he always hams it up for the photographers in the photo-pit which is a dream. Before their encore, Davies takes the stage on his own, and plays an incredible drum solo, before being joined by bassist, Jed Elliot.  Elliot takes his time getting the crowd excited, and then he joins Davies for an incredible drum and bass duet. After a few minutes of this Adam Slack takes the stage and joins them. The band plays instrumentals for a bit until Spiller takes the stage again, after a complete costume change. The band finishes their set out with a cover of the Bowie song, “Rebel, Rebel” and then closes their set with “Where Did She Go”.

If you’ve never seen The Struts perform before, you are missing out. Next time they’re in town, you need to get yourself out of the house and down to their gig, it will completely change your life.