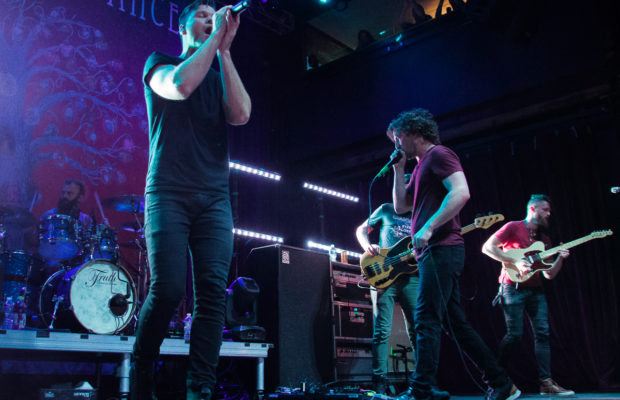 Dance Gavin Dance with I See Stars, Erra and Sianvar

California post-hardcore band Dance Gavin Dance made a stop in Louisville, KY recently to a sold out crowd of fans.  The band has been touring in support of their latest album entitled Artificial Selection, which was released on June the 8th.  The crowd was in high spirits this evening and restless for the night ahead.  As the lights dimmed, signaling that Dance Gavin Dance was about to take the stage, the crowd was cheering and clapping in anticipation and excitement.  Once the band hit the stage and the lights came on, the band was all energy and the crowd had their hands in the air.  Starting things off with “Frozen One”, the band continued to perform a variety of songs from their 8 album catalog, including “Acceptance Speech”, “Alex English”, “We Own The Night” and “Summertime Gladness”, as well as some new ones including “Care” and “Midnight Crusade”.  Dance Gavin Dance is a dynamic live band, with singers Tilian Pearson and Jon Mess sharing in vocal duties and interacting often with the crowd.  The band has a lot of fun on stage, with Pearson often stopping to groove and move his body to the music!  For most of the set, the crowd was chanting the lyrics and jumping up and down with their fists in the air.  Pearson and Mess often led the crowd in sing alongs, with the crowd happily participating.  There were plenty of crowd surfers, as well, keeping things lively during the show!  It was pure fun and energy!  Ending their set with “Man Of The Year”, the band briefly left the stage before coming back out for a 2 song encore.  Starting it off with “Inspire The Liars”, the band ended their set with “Lemon Meringue Tie” from their first album Downtown Battle Mountain.  It was a great night of music and energy and a great crowd who were having a blast! Sianvar (Dance Gavin Dance guitar player Will Swan’s other band), Erra and I See Stars opened the show and really got the crowd excited and full of energy for the night ahead!