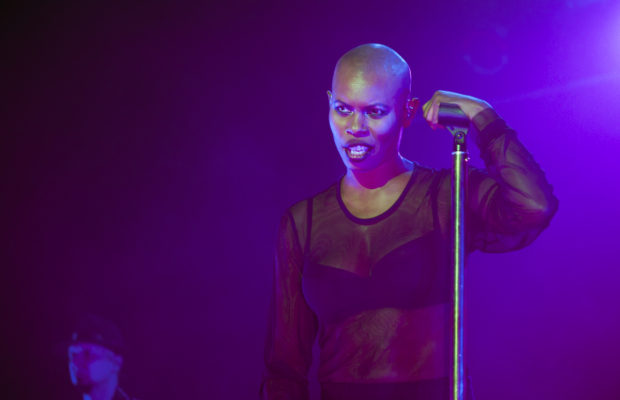 Almost exactly 1 year after their previous London show and at the peak of their European tour, Skunk Anansie have returned to where it essentially all started. With this show becoming SOLD OUT pretty much the second it was advertised, the O2 Academy Brixton was packed with fans, young and old, who came to witness the phenomena that is Skunk Anansie.

The evening kicked off with an excellent performance by The Pearl Harts, a duo of two talented raging ladies, who got the crowd’s immediate attention the second they started playing. Probably being referred to as the female answer to Royal Blood quite regularly, The Pearl Harts produced a unique sound and were full of charisma, which are more than enough to put them on the radar of bands to watch in the coming year.

After a short interval, it was finally time for Skunk Anansie to take over the stage. By that time, the place was already as busy as a beehive.
Brixton is a special place for the band, and especially for lead singer SKIN who grew up in the neighbourhood. They referred to this show as their ‘homecoming show’, and broadcasted it on Facebook Live (or at least tried to!), for all the other fans who couldn’t make it to see them in Brixton.

With things like Brexit, Homophobia and Trump happening in the world right now, Skin, who was never too shy to express her views, had a lot to talk about in between the songs- which sounded like they were more relevant than ever today.
The band is known for their support of the LGBT community, and are generally quite socially active and support many great causes. Tonight, for example, they were selling signed drum heads on their merch stand, from which all proceeds​ will go to m​ usicsupport.org, a non-profit charity organisation, meant to help & support the music industry with drug & alcohol addictions and mental health struggles and issues.

A surprising addition to Skunk Anansie was keyboardist / backing vocalist Erika Footman, who joined Skin for a few energetic douets during the night.

Skunk Anansie have provided everything their hardcore fans were hoping for, and probably pleasantly surprised the first-timers with Skin’s epic crowd surfing, Cass’s heavy bass riffs and the overall energy and vibes this great iconic band produces on stage.

Skunk Anansie have recently added a few Spring UK dates, make sure you get your tickets soon as they sell out fast!