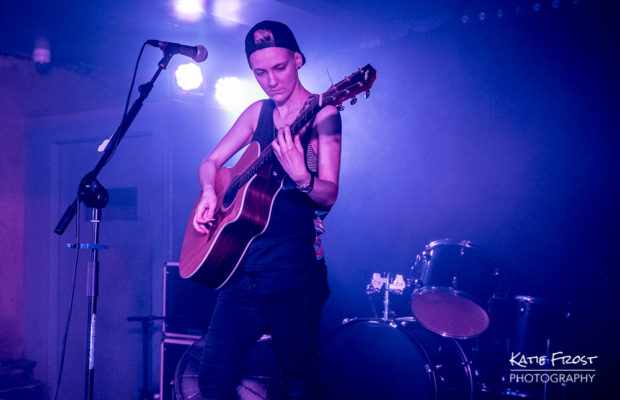 This show was the third date of Sally Pepper’s first ever UK tour which saw her play London, Birmingham, Manchester, Newcastle and Glasgow.

First to take to the Factory stage was Mike Bladen who played a fantastic acoustic set accompanied by a violinist. This wasn’t something you get see every day and was a wonderful way to start the evening. Mark will be return to play Factory on 23 September.

Next up were female-fronted pop-punk band The Prophets from Coventry who opened their set with Closest Thing from their current EP “Waiting For The End”. They played a high-energy set from the start, featuring two further tracks from their latest EP, together with a selection from their debut self-titled EP. The Prophets play a headline show at Kasbah in their home-town of Coventry on 9 September, with support from Tan.Trum, All The Rest and Pretty Viles.

Main headliner for the evening were alt-rock band A Mouth Full Of Matches from Manchester. The band played a brilliant set in front of their home crowd, featuring tracks from their three EPs as well as a brilliant cover of “Can You Feel My Heart” by Bring Me The Horizon. At the end of their set they invited all of the other bands to join them on-stage, which was a lot of fun!

Headlining the evening was acoustic pop/rock singer Sally Pepper. Sally’s music is incredibly catchy and lyrically entertaining and she more than holds her own on stage with just her guitar and pedal-board. A personal highlight for me was her cover of “Down With The Sickness” by Disturbed, which worked brilliantly!