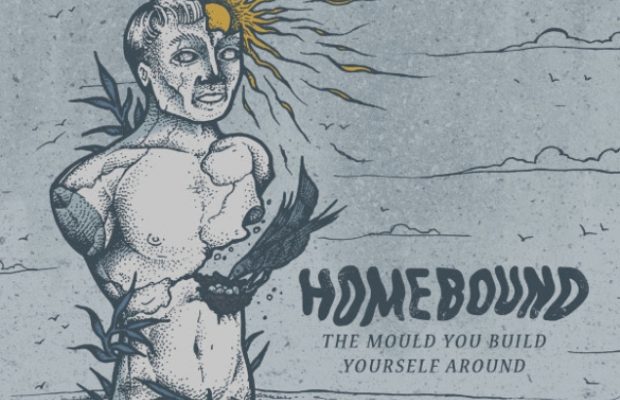 As the new year continues, more and more releases have been taking the music world by storm. Included in that is England-based pop punk quartet Homebound. Signed to Rude Records, the same label as other greats such as Set It Off and Less Than Jake, Homebound is set to release their third EP, The Mould You Build Yourself Around, February 10th.

The Mould You Build Yourself Around, which is their first release since 2015’s Permanence EP, mixes authentic pop punk with a heavier punk beat. The quartet, made up of vocalist Charlie Boughton, guitarists Tom Mellon and Chris Wheatley, and bassist Joe Aspell-Beaumont, have surely outdone themselves with this release. It’s an impeccable album with upbeat and catchy riffs throughout.

“Headspace” kicks off the album with a raw guitar riff, and typical pop punk bass line. The song was released back in 2016 as the first single from the album, and the music video has reached over ten thousand views on YouTube since its initial release. The song, as Boughton explained, is about the time after a breakup where you take time to focus on yourself. The lyrics back that up, such as “Your future was never with me,” and “I know that I’ll be fine, need a little space and time to see there’s so much more to life, but for now, I’m giving in.”

Following “Headspace” is “Pensive,” which also is the picture perfect pop punk jam, completed with a mix of an aggressive hardcore guitar line and a vivacious, energetic punk one, outspoken and true lyrics, and the distinctly recognizable pop punk drums.

“Distrait” is up next and the most pop sounding song on the EP. The vocals are more on the punk side, but the background instrumentals are rather pop influenced. Their most recent single, “Sonder,” is the fourth track on the album, and is a heavier, darker ballad. Along the lines of A Day to Remember, Hands Like Houses, and Neck Deep, “Sonder” is the best pop punk song on the album. It’s gritty guitar and vocals make it the perfect song for a live show, and I can guarantee this song will be one hell of a jam live.

For Fans Of: Hit the Lights, Neck Deep, Hands Like Houses