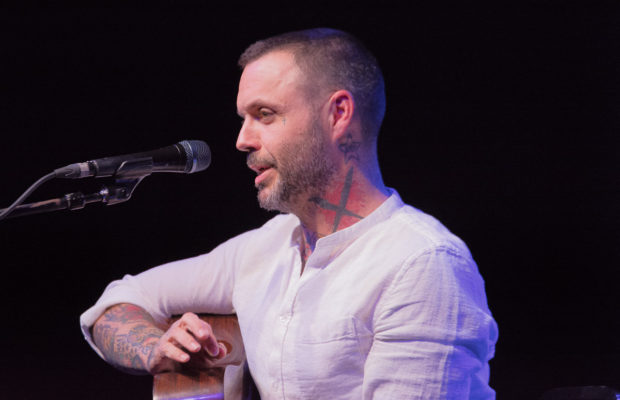 Justin Furstenfeld of Blue October brought his Open Book Tour to Louisville, KY on February the 6th. It was an incredibly personal evening, in which Justin performed an acoustic solo set to a packed house.  It was a very intimate setting where he played to a mostly seated and captivated audience, who were so silent during his set that you could have heard a pin drop.  Justin spent his set alternating between songs, storytelling and a short question and answer session.  In keeping with the theme of his Open Book Tour, he was incredibly open and honest with his stories, many of which were about his struggles with adapting to the success of Blue October, addiction and fatherhood.  While some of the stories were incredibly heartbreaking, others were funny and uplifting.  All of his stories, though, tied into the songs he sang in the most perfect way.  The audience spent the evening laughing, crying and singing along to many of their favorite songs.  He was brutally honest about the experiences he has had in his life, which have led him to where he is today.  He ended the evening with an incredible acoustic rendition of Into The Ocean, one of Blue October’s biggest hits.  Justin is a remarkable singer and storyteller, and was able to interweave the two for a truly memorable evening.