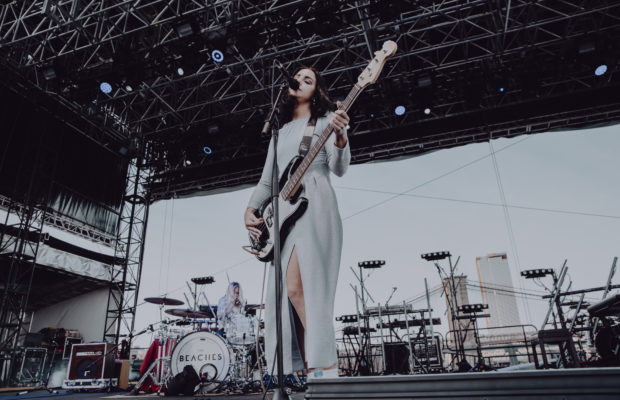 The Rooftop at Pier 17

Hailing from Toronto, Ontario, Canada, all girl powerhouse rock band, The Beaches, completed their second and final performance in New York City on Tuesday night. The sun was setting over Lower Manhattan’s newest music venue, the Rooftop at Pier 17, as the JUNO award winning band took the stage.

The golden hour light was shining strong from the West, hitting both The Beaches on stage and the Brooklyn Bridge in the background with the perfect red/yellow hues. The band’s forty-five minute performance was stocked full of energy as guitarist Kylie Miller towered over the edge of the stage, shredding the faces off the fans in the front row.

The Beaches setlist was full of songs that catered to fans of all scopes. Most notably on the setlist was the band’s hit songs “T-Shirt”, “Gold” and set finale “Late Show”. However, The Beaches made sure to pepper in some new songs from their highly anticipated EP, The Professional; which was released just last week!

Tuesday night’s show having been my first time seeing The Beaches, I have to say — they are definitely a band to keep an eye on in the future. Their unique style and sound quality elevates them to the top tier of up and coming bands in the industry and it surely will not be long before these women are household names!