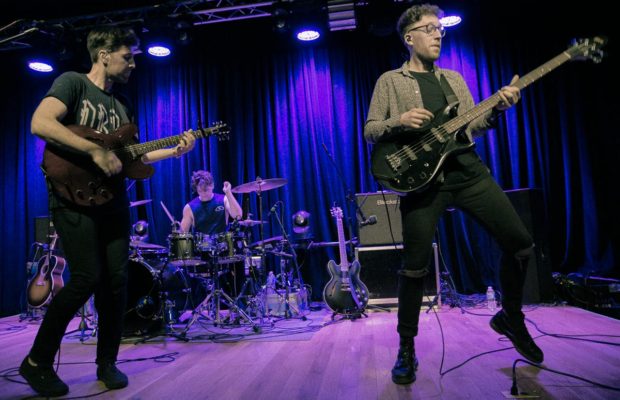 Indie-electronic group, Alvarez Kings, made a stop in Louisville recently on their current US tour.  Hailing from Sheffield, England, the band performed to a crowd of enthusiastic fans, playing a variety songs from their Ep, as well as their debut full-length album.  Although some fans had seen them perform at previous Louisville gigs, there were also many new faces in the crowd who were converted to fans by the end of the night.  Singer Simon Thompson and band mates Sean Parkin, Richard Walker and brother Paul Thompson, were in the midst of their first headlining tour of the US and were in high spirits as they performed.  The guys were incredibly engaging with each other, cutting up a bit on stage, as well as with the crowd.  Towards the end of the set, Simon jumped off of the stage and into the crowd (much to their delight), singing two songs amongst the fans, one with the band and one acoustically with Sean.  They kept the crowd dancing throughout the entire set.  These guys genuinely love performing together and love their fans, making for a really fun evening.  I have no doubt that they, and their fan base, will continue to grow!