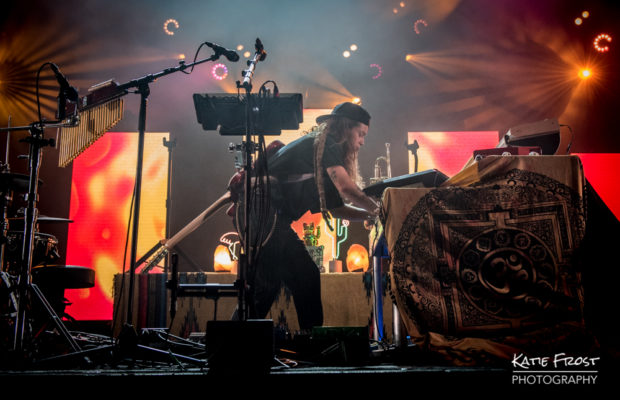 On Friday night I headed south of the river to see Australian singer-songwriter and multi-instrumentalist Tash Sultana play the second of three sold-out shows at London’s Brixton Academy, promoting her debut album Flow State which was released last month. I had been looking forward to this show for ages, having missed out on getting tickets for her sold-out shows at Scala and Shepherds Bush Empire last year.

Support came from fellow Aussies Pierce Brothers who took to the stage around 7:30pm and received a very welcoming reception from the already packed venue. This was my first time seeing the multi-instrumentalist twin brothers Jack and Pat Pierce perform and I really enjoyed their unique brand of folk music. For me their sound was unmistakably Australian, and instantly transported me back thirteen years to when I spent a year in their magnificent country. The brothers were as charismatic as they were talented, and their performance was full of energy – at one point Jack jumped down from the stage with his drumsticks to play some rhythm on the barrier, to the delight of the crowd. Pierce brothers played a wonderful set which included tracks from their highly anticipated full-length debut album Atlas Shoulders which is due for release on October 26 2018.

After a triumphant set from Pierce Brothers the almost 5,000-strong London crowd were nicely warmed up for the main act – the wonderful Tash Sultana. The Melbourne-born artist has gone from posting YouTube videos from her bedroom to selling out major venues globally in just a few years; commanding worldwide attention.

I loved the set-up for Tash’s performance – a small raised stage covered in rugs and fabrics, adorned with a selection of homely items including a lucky cat with a gently moving paw, illuminated crystals, plus neon flamingo and cactus lights crystals, together with a whole host of different instruments. It was almost like someone had transported her bedroom to the centre of the stage and opened up all of the walls for us all to see the magic inside. She also performed barefoot which added to the homely feel of the evening. Various psychedelic images were projected onto five rectangular screens behind her, and the smoke from incense sticks filled the air – there was a wonderful vibe in the room.

Tash delighted the crowd with tracks from her debut full-length album Flow State which was released last month, as well as one of her most famous tracks “Jungle” from her 2016 Notion EP. Queen of the loop-pedal, Tash created rich layered sounds featuring a whole host of instruments; from guitar and drums to windchimes and a trumpet. Her performance was brilliant and proved that the hype around her is most definitely justified!

If you couldn’t get tickets to see her on this run, fear not as Tash Sultana will return to the UK on 28 June 2019 to play Alexandra Palace. Tickets available here. Pierce Brothers play Electric Ballroom in London on 12 October. Tickets and more info here.