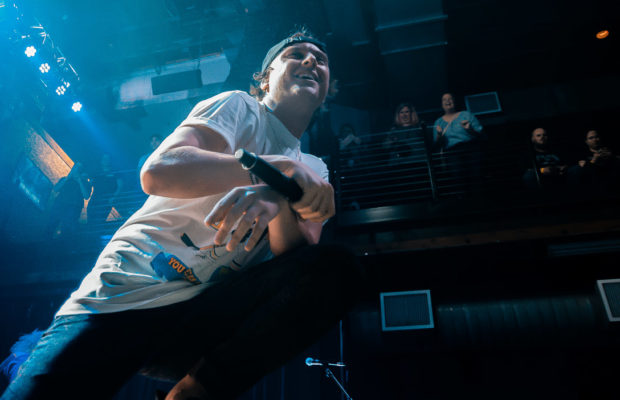 State Champs with The Dangerous Summer, Grayscale and Big Smile

NY pop punk band State Champs, who is currently wrapping up their Living Proof Tour with Grayscale, Our Last Night and The Dangerous Summer, performed to a sold out crowd in Louisville, KY recently.  Having to unfortunately cancel their Louisville show a few months back, the band performed a re-scheduled show this evening, much to the delight of their fans who were in attendance.   The entire venue was buzzing with energy as soon as the doors opened, with fans rushing to ensure their spot at the barricade or as close to the stage as they could get.  With a large State Champs banner hanging at the back of the stage, 3 platforms at the front of the stage for singer Derek DiScanio, guitarist Tyler Szalkowski, guitarist Tony “Rival” Diaz and bassist Ryan Scott Graham to stand on throughout the evening and fog cannons set up along the back of the stage, the band was ready to give their fans the amazing show they had been waiting for!  From the moment the band came out onto the stage they delivered a high-energy performance that had the crowd singing along with their hands in the air.  Starting things off with “Criminal”, the band performed a nice variety of songs, from older tracks to plenty of newer songs from their recently released album Living Proof. DiScanio is a dynamic frontman, making use of all three platforms and the entire stage, ensuring that he engaged with the entire crowd.  Telling the crowd that they were supposed to play Louisville a few months back but had to cancel, DiScanio thanked them for coming back out this evening for the band’s first sold-out Louisville show!  The band was having a great time on stage, feeding off of the energy of the crowd, and engaged their fans throughout the entire set.   With the fog cannons going off periodically, the passionate singing from the fans, the steady stream of crowd surfers and the band-led sing-alongs, the room was alive with energy.

Several songs into their set, the band left the stage, leaving DiScanio on stage with his acoustic guitar.  He told the crowd that he was going to play a song from the band’s Acoustic Things album, launching into “If I’m Lucky”, which garnered plenty of cheers from the crowd.  The band came back out towards the end of the song, immediately performing the band’s hit song “Our Time To Go”, to which the entire venue snag along at full volume.  It was an amazing moment to witness!  He then told the crowd that last year the band’s first album, The Finer Things, celebrated it’s 5 year anniversary, which they had been celebrating, and thanked the fans for their continued support over the years.  He then said that the band was going to play some songs from the album.  The band left the stage soon after, coming back out moments later for an encore, walking to the front of the stage to bend over and shake the hands of the fans at the barricade, with DiScanio asking the crowd if they should keep playing all night before saying they had 2 more songs, starting the encore off with “Elevated”.  “If we come back sometime in the future, will you come and see us again?” he asked before the final song.  “We’re going to play one more song!  I want to see everyone crowd surf!” said DiScanio, before ending the set with “Secrets”.  The fans definitely kept security busy with the steady stream of crowd-surfing.  State Champs is a true live band, putting on an amazing show for their fans and ensuring that everyone had a great time.  I imagine everyone is anxiously hoping they make another Louisville stop on their next tour!  Grayscale, The Dangerous Summer and Big Smile opened the show.  Our Last Night was unfortunately not on the bill for this tour date.