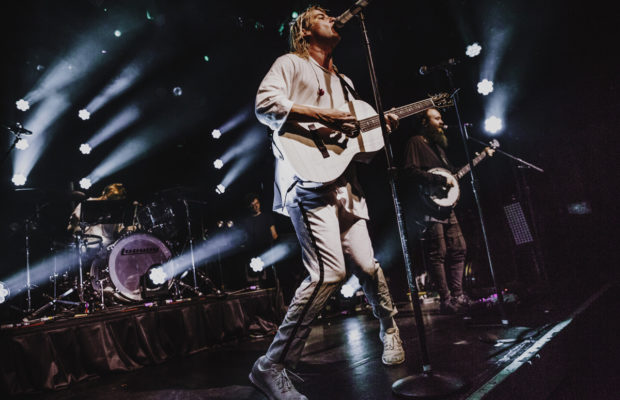 Judah & the Lion with The Academic, Tyson Motsenbocker

It’s a Wednesday evening. I’m standing outside of Irving Plaza. The weather isn’t the best but the line the enter the venue bends around the block. I’m watching as fans eagerly wait for the doors to open. Finally, it was 7pm sharp and the crowd flooded through. Judah & the Lion would be performing their “Going To Mars” tour live on stage tonight, bringing along The Academic and Tyson Motsenbocker. It was a sure to be a great night… and the boys definitely did not disappoint.

Solo opening act Tyson Motsenbocker took the stage, electric guitar in hand. He opened his set with a slow ballad as I stood, alone in the photo pit, watching the emotion on his face. Between songs one and two he swapped his electric guitar for an acoustic before plunging into a heart wrenching story about losing his mother to cancer and struggling to deal with his faith in Jesus. The crowd was captivated as Motsenbocker poured his heart out on stage. Though his songs were heavy in meaning, quite profound and slow, Motsenbocker included stage banter between songs that detailed his intricate experience during his time in New York City — which included getting in a verbal altercation with a stand up comedian. “I don’t recommend it… they’re very smart” Motsenbocker said, chucking as his tuned his guitar. He thanked the crowd before diving into his final song and leaving the stage.

It was a quick swap between Motsenbocker and The Academic and before we knew it, we were on our feet, dancing to the indie bops of the Irish boy band. The Academic were embarking on their first national tour in The United States but their confidence showed otherwise. They made the nearly sold out venue their own during their lengthy 45 minute set. Looking at the crowd from the stage right balcony, I could tell that there were few people who had seen or heard of The Academic before but after their lively set, they had garnered more than a few fans. Hopefully it will not be the last time we see these boys take over the stage in New York City.

Finally, it was time for the main event. The lights dimmed and the venue went black. Fog began to bellow across the stage while an old audio recording about Mars came through the speakers. From behind the stage, lead vocalist, Judah Akers sang the intro to “Booty Wurk” by T-Pain. All of the sudden, Judah & the Lion stormed the stage, one after the other, shaking their buts and breaking it down. Amidst roaring screams from the crowd, the band couldn’t help but break out in huge smiles. Akers grabbed his acoustic guitar before shouting “Hey!” into the microphone and the banjo broke out as they played “Twenty Somethings”. The energy within the venue only continued to build the further the band delved into their set. As we reached the midpoint of the set, the crowd literally erupted into cheers and fans were jumping over each other as the intro to “Mr. Brightside” by The Killers came on. Judah & the Lion put their own spin on the hit song before plunging into other hit songs like “Suit and Jacket”, “Green Eyes” and “Take It All Back”.

The band left the stage but they weren’t fooling anyone. Chants for an encore began and within a brief moment Judah & the Lion were back for more. They ended their set with a cover of the wholesome classic Bill Withers song “Lean On Me”. Judah & the Lion made a name for themselves when they opened for twenty one pilots a year and a half ago, garnering an entirely new following of fans. Now their time has come and they are setting their name on fire, playing high energy shows in venues across North America. I’m calling it now when I say that it’s not going to be long before Judah & the Lion is a name that everyone knows.