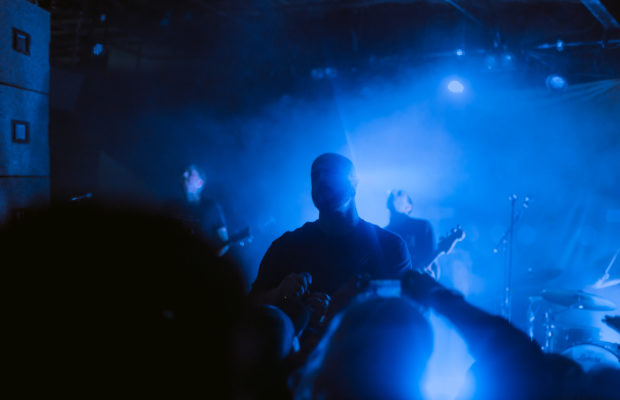 Last Friday night, yeah we danced on tabletops. Yeah, we took too many shots. Think we kissed but I forgot! If you asked Katy Perry what last Friday night is all about, she might sing that as the answer. Well, for a good chunk of Chicagoans, along with out of state fans from far and wide, last Friday night was actually about the Private Room tour, a co-headlining Being As An Ocean & Counterparts tour, featuring special guests Have Mercy and Varials.

Metalcore money boys Varials kicked off the night with a short setlist, playing a good handful of songs off of their debut full length, Pain Again, released in August of 2017. Their set definitely brought the energy to the room, and it was definitely enough to warm everyone up for the rest of the night’s events. Following Varials’ set, Have Mercy slowed down the room and gave everyone a minute to catch their breath. With a sound far across the spectrum from Varials, Have Mercy still managed to maintain most of the audience’s attention for their set. Between the two openers and the two headliners, a tour this diverse has not hit a room in Chicagoland in quite a while, so it was a refreshing change of pace, and brought such a diverse crowd.

The diversity of the room showed even brighter when the first headliner, Being As An Ocean, took to the stage. With lighting that matched the sound of their of their most recent album, Waiting for Morning to Come, the band invited their audience into a hazy, softly-lit other world. With glowing pink and aqua lights, smoky haze radiating the room, and soft-melodies and beats pulsating through everyone’s eardrums, the band had everyone’s eyes on them. Unclean vocalist Joel Quartuccio took it into his own hands to get up-close and personal with the crowd – within minutes he had climbed onto the barricade, put the mic in countless peoples’ faces, and by the time their set ended, had gotten into the middle of the crowd, holding onto people while they screamed the words back to him and swayed like an ocean. The entire time this was happening, the beautiful croons of clean vocalist Michael McGough carried the melody around the room, along with the beautiful guitar-work of Tyler Ross, Ralph Sica on bass, and Anthony Ghazel manning the drums. This band’s ability to hold a room captive and make them feel like one whole being is something so ethereal, especially within their genre. Their set was phenomenal.

Following up and closing out the night were metalcore boys Counterparts, whose set was quite a twist from every other band on the bill. With strobing, harsh red and blue lights, Brendan Murphy’s quick and pointed growls, and some fast-paced riffs, the band had no issue getting the crowd moving faster than lightning and harder than a hurricane. They played a strong mix of songs, including singles off of their most recent full-length, You’re Not You Anymore, but also songs off of their Private Room EP, and small handful of older tracks like “Burn” off of Tragedy Will Find Us, “The Disconnect” off of The Current Will Carry Us, and “Compass” off of The Difference Between Hell and Home. The most refreshing part of the band’s set, however, was not what they played, but what they had to say and who they were playing for. Murphy made it a point about halfway through the set to point out the mixed-bill, which most, if not everyone, had very clearly already noticed. He explained that growing up, every band on that stage had gone to local shows, most of which were mixed-bill shows, and that was where they got their start. They wanted to pay some homage to that, and remind everyone that mixing different sounds on one show is far from a bad thing. They were right. A mixed-bill with melodic hardcore and metalcore headliners, in a 700 cap room, on a Friday night, was one of the most wonderful sights to see.