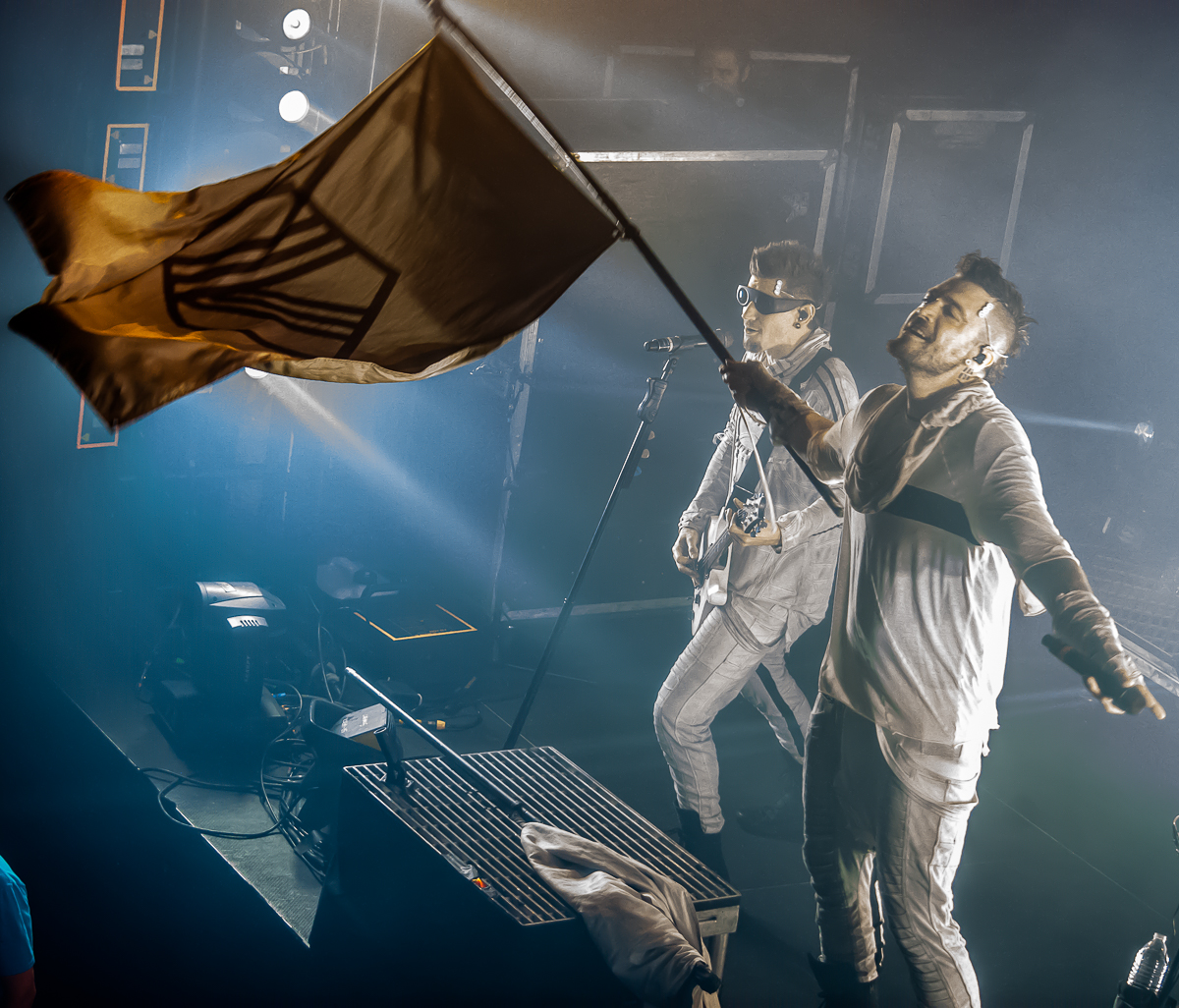 Starset with Red, Oni, and Divide The Fall

On July 13th, Starset ended their Horizons 2022 Tour in Louisville, KY to a nearly sold out crowd! The sizeable crowd of fans awaiting doors this evening grew exponentially as the evening wore on. Starting things off this evening was Minneapolis indie hard rock/metalcore/post-hardcore band Divide The Fall. These guys have a great energy on stage and really got the crowd energized for the evening. Singer Ethan Weinaug announced that the band had just dropped a new song, “Without You”, which they then played for the crowd. He went on to say how this was the last night of the tour and that the band was really happy to have been on tour with Starset, Oni, and Red. He also said that the band was 100% independent and that merch sales keep them going on tour and said how much they appreciate their fans and everyone who came out this evening! They ended their set with “Fake Love”, leading the crowd in a spirited sing along! Next up was Canadian progressive metal band Oni. These guys were so much fun and had a really energizing stage presence. Although they didn’t chat too much between songs, they really had the crowd pumped with their good energy and fun interactions with each other on stage and engagement with the crowd. With technical but fun and melodic songs, they had many in the crowd singing along! Next up was Nashville rock band Red. Singer Michael Barnes has a commanding stage presence and led the crowd in sing-alongs throughout the evening and chatted and joked with them, as well. Having formed in 2002, the band has grown their fan base over the years and clearly had many fans in attendance this evening. Playing a nice selection of songs during their set, the band ended their set with Barnes announcing that this was last show of the tour, with the bands having played 35 shows over 7 weeks. “Before we play our last song this evening, make some noise for the other bands tonight! I know you know this last song, so sing along”, then launching into their hit song “Breathe Into Me”.

Closing out the show this evening was Columbus, OH rock band Starset. Coming out on stage to an impressive array of futuristic costumes, smoke machines, and stage lighting, the band that everyone this evening were here to see did not disappoint with their incredible mix of music and multimedia. Having heard many amazing things about live Starset shows, I was very happy to finally experience their live show for myself and was blown away by the amount of work that they put into their stunning live experience. Early in the set, singer Dustin Bates told the crowd how the band had started out as a 4 piece band and thanked everyone who had been with them from the beginning and helped them to grow into the 7 piece band they are today. “This is a great crowd and is the final night of this tour! Thanks for bringing this energy tonight! I know you like heavier stuff, so we will do our best to oblige!”. The band sang a nice mix of songs from their 4 albums, with their most recent album, Horizons, released last year. With the band breaking their set up into two parts, they had a brief intermission in which they played a video on a screen for the crowd, and then came back out, with the guitarist and bassist wearing space suits. Towards the end of the set, Bates jumped onto the barricade and sang directly to the crowd, shaking hands and really connecting with the fans. It is apparent that Starset has a dedicated and passionate fan base and the band loves their fans as much as their fans love them. It was a really fun night that no one was ready to see come to an end!