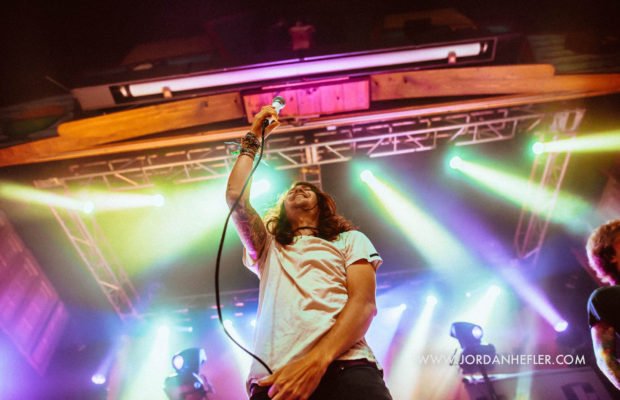 Making a pretty significant dent in the early/mid-2000’s emo world, Mayday Parade has been one of those bands that has stuck around but remained relevant even after ten plus years. The band kicked off their celebratory ten-year anniversary tour of “A Lesson in Romantics” (arguably one of the most influential albums of the indie/emo genre) in New Orleans, LA on March 23rd. It was no surprise that the show sold out pretty fast, along with many other dates on their tour list.

Opening the show was Milestones, a newly signed pop-punk act from the UK. Not only was the New Orleans date the first night of tour for Milestones, but it was also their first American performance period. The band showcased their limited yet diverse set of pop-punk tunes to the packed crowd with fresh energy. The audience chuckled along with lead vocalist Matt’s jokes told on stage, and cheered in support when they mentioned that New Orleans was their first American show.

Up next was Knuckle Puck, who seemingly is riding at the top of the current pop-punk wave. Having recently made the rounds with Warped Tour, lead singer Joe mentioned that this was the first time they “properly” played a show in New Orleans outside of coming here on the tour last summer. Most of the audience seemed energized and familiar with the Chicago band’s music. Performing crowd favorites like “Gold Rush” and “No Good,” the band continuously encouraged the crowd to let loose and jump with them.

Closing out the show was the epic performance of Mayday Parade, who in celebration of the ten-year anniversary of “A Lesson in Romantics” performed the album in its entirety as well as a few other tunes. The set production was incredible, and included a full-scale backdrop graphically tied to the iconic orange and gold cover of “A Lesson in Romantics.” The band additionally performed some older songs such as “Three Cheers for Five Years” and “Kids in Love” as well as newer songs like “Keep in Mind, Transmogrification is a New Technology” and “Oh Well, Oh Well.” Lead singer Derek even did a solo-acoustic cover of “Yesterday” by The Beatles. It seemed as if the entire crowd sang along at the loudest possible capacity to every song Mayday Parade performed. There was an obvious age similarity to many of the fans who were probably in their teens at the time that “A Lesson in Romantics” came out in 2007, but there was still a shocking amount of current teens at the show, proving that Mayday has managed to keep their relevance in a genre that is so quickly to be labeled as “nostalgic.”

You can catch Mayday Parade on tour (maybe, if your date isn’t already sold out!) through the rest of May!

Words and Photography by Jordan Hefler