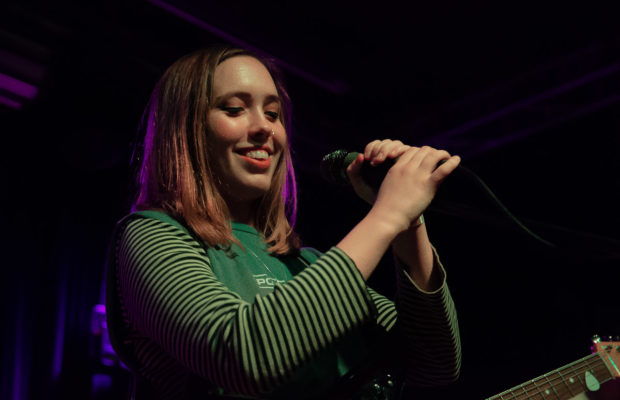 Nashville musician Sophie Allison, better known by her stage name Soccer Mommy, is currently on tour in support of her latest album Clean.  She made a stop recently in Louisville, KY and performed to a packed venue.  As she and her band took the stage, she thanked everyone for coming out, mentioning it was their first time performing in Louisville.  She told the crowd how she and her band mates had awoken early to a dead battery in their van, warranting a trip to the Ford dealership, but made it to the venue on time.  She sang a nice variety of songs, such as “Try”, “Last Girl”, “Flaw” and “Cool”, with many of the songs this evening being from Clean.  As Allison prepared to sing “Your Dog”, she mentioned how the band had just made a video in which the guitarist Julian Powell is dead.  About halfway through the set, she mentioned that it was hump day and that we were halfway through the week!  She said how awesome it was to have Sasami as a tour mate and that it was their first night of tour together.  After playing the first half of the set with the band, they left the stage and she performed several songs solo, starting the solo portion of the set with her amazing cover of Bruce Springsteen’s “I’m On Fire”.  She followed that up with “Still Clean” and “Allison”, a song she said she wrote in college.  She said she dropped out after two years and was glad she was no longer in school, as she would probably be off studying or something rather than playing a show.  For the band’s final song, the other members came back out onto the stage, ending the set with a new song, “Scorpio Rising”.  After leaving the stage briefly, Allison came back out alone to sing one more song solo.  She ended the set with “Waiting For Cars”, a song she said she wrote when she was 18 and putting songs out on Bandcamp.  Los Angeles musician Sasami opened the show.  It was a great night with great music!