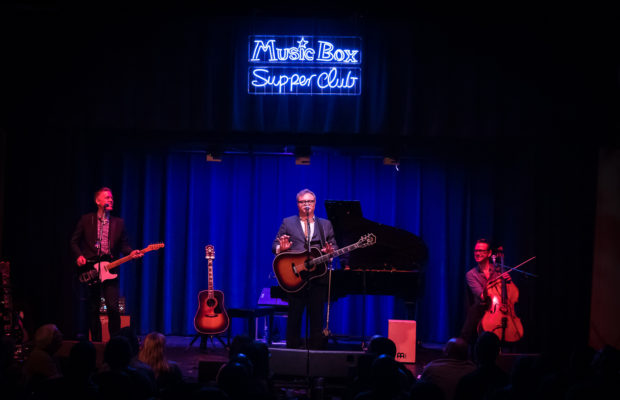 Opening up the night was Wesley Stace (aka John Wesley Harding), who played a stellar set and captivated the audience with his music.

Steven Page, who parted with the Barenaked Ladies in 2009 to pursue a solo career, was welcomed by an enthusiastic crowd and started the night with “There’s A Melody II” from his album Heal Thyself Pt.1: Instinct. He played a total of three songs from that album, as well as three songs from his newest release Discipline: Heal Thyself, Pt. II. The album was released a few weeks ago and is definitely worth checking out.

Of course he included some Barenaked Ladies songs and mentioned that the theme of the night is “play songs from all Barenaked Ladies albums, but only the bum ones”, which certainly was not true. I was very excited to hear hits like “Old Apartment”, “Brian Wilson”, “It’s All Been Done” and “Call And Answer”.

Barenaked Ladies fans will remember that back in the day the band used to play the “Barenaked Rap” which was a medley of popular hits at the time. Steven Page continues this tradition with the “Feel Good Strum”, a medley of songs that make you feel good. Some of the songs were: “My Girl”, “Electric Avenue”, “Sugar, Sugar”, “Ob-La-Di, Ob-La-Da”and “I Wanna Rock N Roll All Nite”.

After a solid 2 hour set and an encore, the band left the stage to a standing ovation.