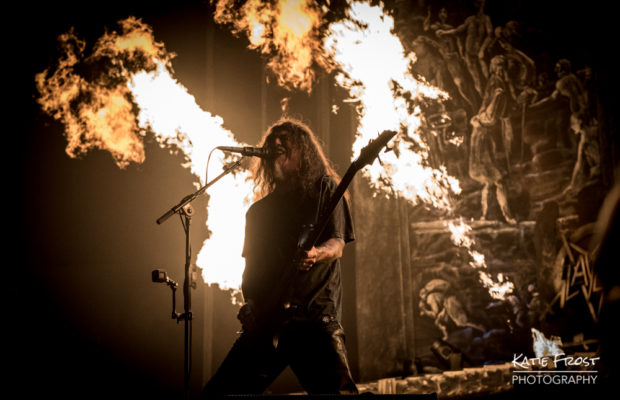 Slayer with Lamb of God, Anthrax and Obituary

On Saturday night I headed to Wembley Area to watch an epic line-up of some of the most well-known metal bands in the world; Slayer, Lamb Of God, Anthrax and Obituary. Tonight was the second of seven UK shows as part of Slayer’s Final World Tour, which began on 1 November in Dublin. With so many awesome bands playing doors opened at the early time of 5:30pm by which time there were already a huge number of metal fans queuing up and mingling around the stadium…and excited roars of “SLAYER!” filled the air!

First to hit the Wembley Arena stage at 6:20pm were death metal titans Obituary, hailing from Florida. Obituary are arguably one of the most successful and influential death metal bands but I have never managed to catch them live until now, so it was great to finally see them tonight. They opened their set with deliciously sludgy and chuggy instrumental “Redneck Stomp” from their 2005 album Frozen In Time (which happens to be one of my favourites) before playing tracks from their most recent self-titled album which was released last year. John Tardy’s vocals were just as imposing and bone-rattling live as they sound on the albums and the band had no trouble filling the 12,500-capacity arena with a wall of sound. They ended their set with another of my favourites; Slowly We Rot from their debut 1989 album of the same name.

Next up were New York metallers Anthrax – another band I have been wanting to see live for years. The band burst onto the stage and launched straight into “Caught In A Mosh”, to the delight of the crowd. Anthrax were full of energy right from the very start, with vocalist Joey Belladonna bouncing around every inch of the stage, and even making his way down onto the speakers in the photopit to get a bit closer to the crowd. As I was in the process photographing the first three songs of the band’s set I noticed something small and yellow out of the corner of my eye…a child dressed as Freddie Mercury posing and singing along to the songs – very cute! Anthrax ended their high-energy set with one of their most famous tracks “Indians” from their 1987 album Among The Living.

Shortly after 8pm Lamb Of God took to the stage. I last saw the Virginia metal legends at this very same venue when they played with Megadeth back in 2015, the day after the horrific terrorist attack at The Bataclan in Paris. The mood in the venue that night was sombre but one of solidarity within the music community, but today the vibe was one of definite joy and excitement. To my absolute delight Lamb Of God played one of my favourite tracks “Walk With Me In Hell” third, which meant I got to enjoy it up close and personal from within the photopit and I could feel every beat rumble through my bones! The band played a great set which featured two more of my favourite tracks from their 2006 album Sacrament; “Blacken The Cursed Sun” and “Redneck”, which was their final song.

With three awesome bands having played it was now time for the main event; Californian thrash metal heroes Slayer, who took to the stage at around 9:30pm. A curtain covering the stage fell to the ground and the band were greeted with a humongous wall of cheers from the crowd. Flames burned along the back of the stage and Slayer got straight into doing what they do best! Over thirty years into their career, Slayer remain the long-reigning titans of thrash. I last saw the band play Tons of Rock festival in Norway back in 2017 and they certainly lived up to the hype then, and tonight was no different. They played a fantastic set filled with a great selection of fan-favourites from their extensive back-catalogue, to the delight of the arena-full of fans. They also had a brilliant stage show which featured a lot of flames shooting in various directions, which at one point seemed to be angled in a way that caused them to form the shape of a pentagram – very metal! It is hard to contemplate that this is the last time Slayer will play in London, but they certainly went out in style and gave us all a show to remember.

Slayer will continue the UK-leg of their farewell tour in Cardiff, Birmingham, Manchester, Newcastle, Glasgow before heading to Europe to play shows until the end of the year. The band have also announced a few festival appearance for Summer 2019 – head to their website for all the details.