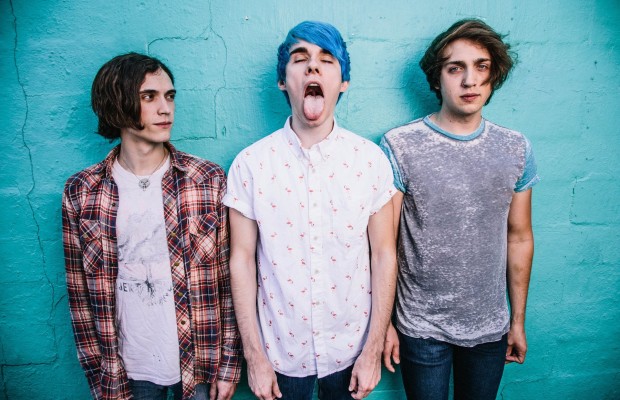 It took you guys a while to pick a band name, how did you guys choose Waterparks and what were other names you were considering?
We took a very long time choosing this band name because we’ve always had really bad band names, so we weren’t in a rush, especially since we didn’t even have any music yet and we think it’s stupid as fuck for a band to get a name and promote a facebook with no music. Hear that? If you’re in a band don’t ask me to “like” your band if I can’t hear your band. Annoying fucks. We wanted something different than the awful hardcore names that were floating around like the “(Verb) the (Noun)” type names or whatever. We were almost named GOLF because we all hate golf and thought it’d be funny or some shit. I’m glad we picked Waterparks instead. We picked Waterparks because we hate Waterparks. FUCK ARMANDO.

When you decided to start writing and recording music to you really have a clear idea on what you wanted the band to sound like?
Absolutely not. We went in with the idea that we weren’t playing any breakdowns but that’s about it. Some people called us pop- punk because our first song sounds pop- punkish but the next song should change that view of us for people.

What are you guys more excited for playing your first show or releasing more music?
Releasing more music for sure. I miss shows, but I love listening to a song and being like “shit, I like this.” It’s rewarding because we don’t really like music very easily. Gage doesn’t like our music.

Was there a moment in your life when you thought about just giving up on being a musicians?
Of course we’ve had to think about it as we’ve graduated and been faced with the “real world” or whatever the fuck that means, but we clearly haven’t given in since we’re still doing this. We’re all really dedicated to Waterparks and aren’t quitting any time soon. Except Tommy. He’s probably gonna quit because he’s an asshole.

Do you think making in the music industry is based on more luck or talent?
It’s mostly just sleazy bullshit, but whatever.

What are three goals you guys want to achieve as a band?
Three goals for the band: play a show with Ke$ha, get on Kidz Bop and be in the soundtrack for Brink 2 if they ever make one.

How do you guys want plan on making all the happen?
Contact the shit out of Ke$ha’s booking people, management, and whatever else we have to do. Submit shit to Kidz Bop submission people until they give up. Shake Walt Disney in his grave until he approves Brink 2 and then work really hard to impress the soundtrack picking people.