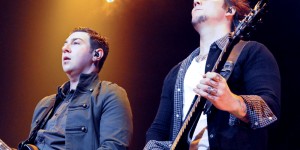 In September 29th, 2011, I had the chance to attend the Rockstar Energy Drink UPROAR Festival. All the bands I saw that day were nothing less than great. Although I knew that the lineup was alright, at the concert, I was definitely shocked by how amazing it was.

Waking up that morning and driving to school, looking out the car window, I just felt miserable. It was windy, cold, cloudy, and it looked like it was going to rain. Once I stepped outside of the car, I got a bit mad, what kind of weather is this for what is supposed to be an amazing day?

I got to the venue at around 2:00 and after getting everything settled we headed towards the outdoor stage. Hell Or Highwater was up first and they put on an interesting performance. I had already heard of them earlier but never really gave them a chance. They sounded great though and now that I think about it, they sounded very good live. It’s always nice to see the band interact with fans as well, as Brandon Saller (vocals) made his way into the crowd and got them to sing along.

Next was Miami, FL’s Black Tide. I’m not going to lie – I was most stoked to see them. They put on a very solid show and their live sound is phenomenal. Usually a lot of bands either sound the same as their albums live, or sound a bit worse, but with Black Tide, they sounded way better. They really know how to get the crowd moving and create wonderful music.

Later on (and after the biggest and slowest lineup that I’ve encountered) we headed on inside the venue. It was a huge arena which could seat more than 12,000 people. The first band that I was able to watch was Bullet For My Valentine. The last time I saw them saw at a smaller venue with not so great sound, so being able to see them at Rexall Place was nice. It immediately became apparent to me that they had an interesting sound and have a incredible live performance. Seether and Three Days Grace were on after Bullet For My Valentine, both putting on great sets.

Shortly after Three Days Grace finished, black curtains were dropped and the crowd became anxious to see what most of them were there for – Avenged Sevenfold. Minutes before their set started the crowd started chanting “A7X” and it sent shivers down my spine. It was so moving to see a whole group of fans getting together, getting to know each other, and all waiting to see a band which has inspired them in one way or another. When the intro for “Nightmare” started to play and the curtain was drawn (well rather carried out) and the lights were dimmed the crowd started to cheer the loudest that they had the entire night. I turned around to look at the fans when the band strutted out on stage, and their faces were just filled with joy. It seems that every single time that I’ve seen Avenged Sevenfold, they still keep the same amount of energy and give it the best that they’ve got.

A huge highlight for the night was when they played “A Little Piece Of Heaven”. When I first heard that song years ago, I never thought that they would be able to play it live. Not to mention the way that M Shadows introduced it as if he was telling a story was hilarious and interesting too.

Overall, the Rockstar Energy Drink UPROAR Festival was just a day filled with fun all around. It’s just a place where you can go hang out with friends, meet great people, and also listen to awesome music!