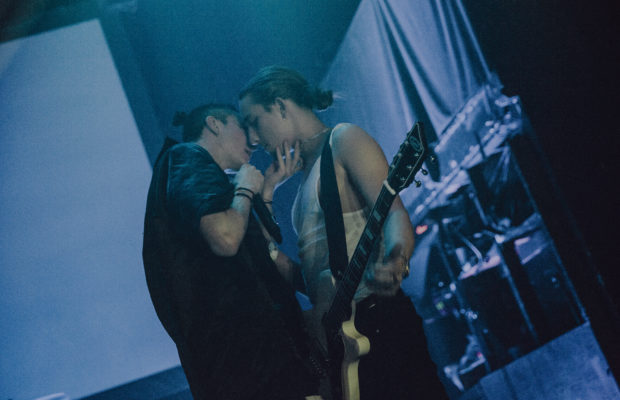 Rather than sit at home and watch the nail biting midterm election results on Tuesday night, I decided to catch the Australian powerhouse band, Chase Atlantic, bring their world tour to New York’s Gramercy Theater. Along with them, RILEY and Cherry Pools would be opening the night and amping up the crowd. Nearly one year after their first performance in New York City, Chase Atlantic were preparing for a sold out show that was sure to bring high energy, great visuals and a fun night.

Opening the evening was solo artist, RILEY, who performed a short but sweet set. With captivating visuals and hands down the coolest mic stand I’ve ever seen (literally it was just made of chains), he brought in the crowd and made sure it was packed to the brim.

Following his set, was the indie-pop trio, Cherry Pools. I first saw this band earlier this year on their winter/spring tour with PVRIS and I was so happy to be able to photograph them this time. Lead vocalist, Martin Broda, and his infamous blue hair graced the stage. His outfit was one for the books, including pointy black sunglasses, a pink fuzzy coat with a see through mesh top underneath and leather pants adorned with chains and handcuffs. He was a real stunnah. The band’s performance definitely lived up to Broda’s outfits as they played their dance filled set like the rockstars that they are. One thing that I have always loved about Cherry Pools was their crowd interaction and general attitude while performing, they just radiate fun. In the middle of their set, Broda jumped down from the stage and climbed into the crowd where he took fan’s phones and recorded videos of him singing and dancing. He definitely made their nights one to remember.

The time had finally come for the band that all of us were waiting for, Chase Atlantic. The Australian band has spent the last year playing shows across America (on the We Were Here Tour with Lights and on the final run of the Vans Warped Tour), and Tuesday’s sold out show proved that hard work does pay off. I have truly never seen Gramercy Theater as packed as it was last night. The GA floor was full of fans ready to party and the seated section above was full, not an open seat in sight. The band opened their set with their hit song “Swim” and from the very first note you could see that these guys were radiating pride and happiness, their true love for what they do was definitely shining through.

The band played a length hour long set that was paired with intriguing visuals on the big screen behind them. The setlist included “Drugs & Money”, “Into It”, “Okay” and an encore of “Church”. The members of the band all played around interacting with each other, like when guitarist and saxophonist, Clinton Cave climbed the bass drum to perform a sick sax solo like no other, or like when guitarist Christian Anthony came over to lead vocalist Mitchel Cave and the two shared a short but sweet kiss on stage. The fans were going wild, my ears were pierced with the sounds of girls screams throughout the venue. It has been truly amazing to see how far Chase Atlantic have come in the last year and to see how much their hard work has paid off and their popularity has grown. If I’m feeling this proud as one of their original fans then I can’t even image the amount of pride the boys themselves are feeling. I urge them to keep going because fans are eating it up. Fans are loving it and this band will be huge very soon!