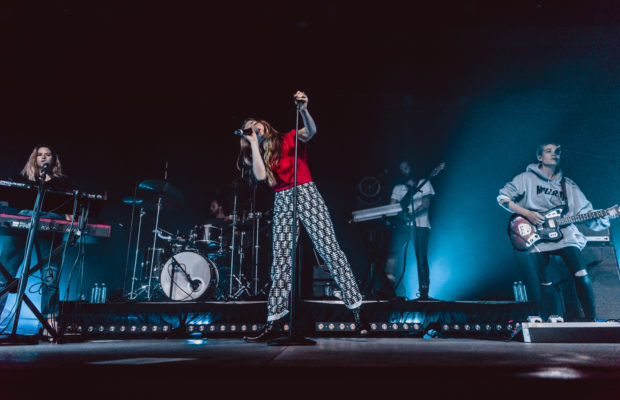 Indie-pop singer-songwriter Maggie Rogers brought her 2018 headlining tour to The Van Buren in Phoenix, AZ, for a that can be summed up in one word: joyous. In just two short years, the young songstress has garnered major critical praise and fan attention, and it only takes a few minutes experiencing Rogers’s live performance to understand why. Discovered by Pharrell Williams after hearing her song “Alaska” at an NYU master class, Rogers has since signed to Capitol Records, announced a new album, and even made her SNL debut this past weekend. In the midst of such a whirlwind year, Phoenix fans likely felt blessed to catch a glimpse of this rising star.

Accompanying Rogers on the road is Grace Shaw, a 19 year-old Australian songwriter performing under the name Mallrat. Shaw’s youth is part of her charm; though her stage presence was far from polished, that’s exactly what made her performance so enjoyable. The young Shaw and her onstage DJ Denim were confident yet unassuming, even treating the audience to some truly adorable, if rather uncoordinated, dance breaks. The lush though mostly low-key indie-pop set was the perfect opener for the show, setting the ideal atmosphere for Rogers’s following set.

Maggie Rogers may not yet be a household name, but you certainly wouldn’t know otherwise from her entrance onstage. Preceded by ABBA’s “Dancing Queen,” Rogers entered the stage to roaring applause from the audience. Kicking off the set was “On + Off” one of Rogers’ more laidback pieces, yet infused with an electricity impossible to ignore that endured throughout the night. Though Rogers released an independent album (produced in a makeshift recording studio fashioned from a broom closet) in her senior year of high school, her official releases are rather light. With only an EP and single releases from her upcoming album, Rogers was able to include nearly every officially released song in her set-much to the delight of the attendees. Several songs, like “Burning,”-performed second-have yet to be officially released. This didn’t deter the crowd at all, with some devoted fans already singing along to the lyrics.

One of the highlights of watching Rogers perform is her sincerity to the music and the audience. The connection she holds to her words and music are evident, whether she is spinning onstage under ethereal lights or gazing into the crowd with tears willing in her eyes. Following “Burning,” Rogers took a moment to address the crowd, telling them the importance to her that they feel safe and welcomed at her show. This energy endured throughout the performance. When she wasn’t singing, Rogers was smiling; she was tirelessly buoyant. And yet never did a moment of the night feel contrived or overdone; it was all completely Maggie.

Rogers has been actively involved in music since childhood, and it shows. Her command of the stage and mastery of her voice was continually impressive. From delicate, sustained falsettos of “Dog Years” to the deliciously effervescent pop vocals of “Light On”, Rogers is a vocalist to be reckoned with. “Back In My Body” was a particular favorite of the night. Though still unreleased, Rogers was eager to perform it, describing the song as “a love song to my body.” Her performance was a sonically masterful as it was passionate, a combination that came to define Rogers’ concert.

Rogers finished her encore with “Alaska,” the song that started it all, to a venue singing the words right along with her. Walking around the venue during this final song was quite moving, seeing fans across ages echoing Rogers’s words in mismatched yet wholehearted harmony. Given Rogers’s opening moment declaring the show a space for people to come together, this encore was especially poignant, and points to the inherent joy of Rogers’s music. Make sure to catch Maggie Rogers the next time she stops by your town. It is not a show you’ll want to miss.

Maggie Rogers continues her tour through April 2019. Check out all dates and grab your tickets here!