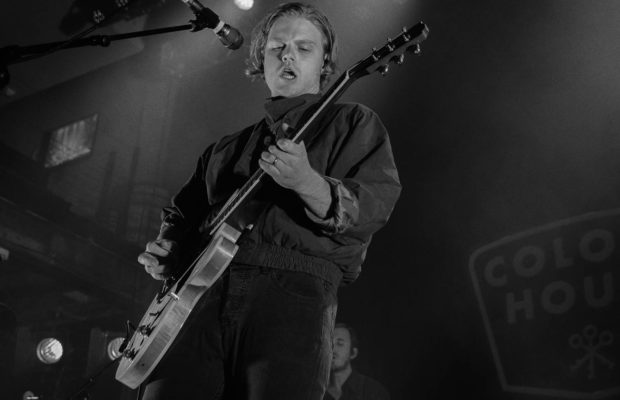 Colony House with The New Respects

Franklin, TN indie rock band Colony House recently wrapped up a 28-date tour of the South, Midwest and East Coast, making a stop in Louisville, KY near the end of the tour.  Having seen these guys perform this year at Forecastle Festival, I was excited to see them again, this time headlining a regular venue.  Drawing a large crowd on this Saturday night, it was clear that everyone was ready for a good time. As the band took the stage, the crowd cheered loudly, eager for the band to begin.  Starting the set off with “1234”, the band got the crowd dancing with their energetic music and stage presence.  Singer Caleb Chapman chatted frequently with the crowd throughout the evening, telling the crowd early on “I’m not sure if we’ve headlined Louisville before so we need to prove ourselves to you.  Louisville, you are a cool city and need to prove yourselves to us too!  I’m going to count to three and you lose your minds!  Let’s do this together!”.  They then performed a nice variety of songs from both of their albums, such as “Silhouettes”, “Learning How To Love”, “Cannot Do This Alone”, “You & I” and “Lonely”.  Later in the set, Chapman asked the crowd if the band could play them a new song, saying “It’s kind-of like meeting the friend of a friend, when your friend brings someone with them to hang out with you. You have to pretend to like them  and maybe by the end you like the new friend better then your original friend”, which made the crowd laugh.  The band then performed their new song “Lights On” off of their new album Only The Lonely that was released last year.  Chapman later told the crowd that the band was going to do an acoustic medley and that it had been nice to play songs they hadn’t sung in a while.  They then performed a beautiful acoustic rendition of “Caught Me By Surprise” with each member taking their turn at the microphone.  Ending the set with “You Know it”, the band left the stage briefly before returning for another song.  Bringing out the opening band, The New Respects, they ended their set with “Moving Forward”, with both bands taking a bow before leaving the stage.  Both bands played really amazing sets and gave the crowd a fun night of music and dancing!