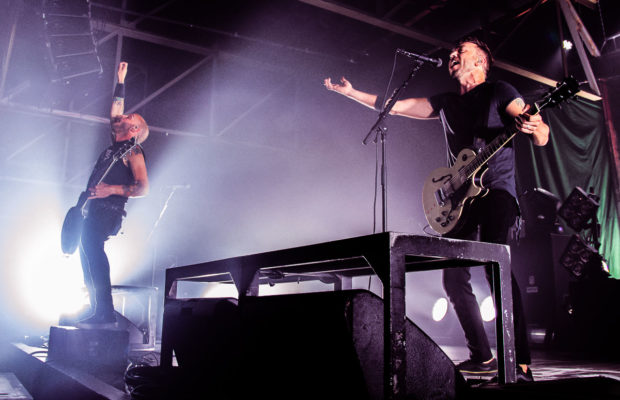 Rise Against with AFI and Anti Flag

Rise Against brought their Mourning In Amerika tour to Nashville recently, performing to a sold out crowd!   A long line of fans were eagerly waiting outside of the venue for doors to open, rushing in to claim their spot at the barricade when they did.  Opening the show this evening was Pittsburgh punk rock band Anti Flag.  With two screens set up on each side of the drum kit, each screen depicting an image of police brutality at protests, the band was pure energy from the moment they walked on stage.  Early in the set, singer/guitarist Justin Sane told the crowd that it was cool if they wanted to stand around with beers in their hands but the band was there tonight for active crowd participation!  They achieved their goal and involved the crowd in most of their set, whether it was coaxing sing alongs, waving their hands in the air, forming a circle pit or crowd surfing!  As the band was preparing to sing their last song, they asked the crowd to clear some space near the barricade and proceeded to move the drum kit into the crowd for the entire song!  It was a fun and wild way to end their set!  Next up was California rock band AFI.  The crowd started chanting ‘You are bleeding, we are one” over and over as the band prepared to walk out on stage, anticipation heavy in the air for their set.  As the band came out onto the stage, singer Davey Havok stepped up onto a pedestal at the front of the stage to sing from, which allowed him to better engage the crowd.  Havok, guitarist Jade Puget and bassist Hunter Burgan were all incredibly active on stage, with plenty of leg kicks, jumps and microphone twirls.  Along with some more recent songs, the band played some older hits as well, such as “Sacrifice Theory” and “Malleus Maleficarum”, causing the crowd to go wild with applause.  Havok used his mic stand as a prop for the entire set, twirling it around and many times leaning it forward until he was almost parallel to the ground!  Rounding out their set with a cover of David Bowie’s “Ziggy Stardust”, “Miss Murder” and “Totalimmortal”, AFI played a high-energy set!

Headlining the show this evening was Chicago punk band Rise Against.  Not far into the set, singer/guitarist Tim Mcllrath thanked the crowd for coming out this evening, for all of their dedication and for all of the miles they had traveled over the years to see the band.  He proceeded to tell the crowd that this evening was a momentous occasion for the band, apologizing to crowd as he admitted that it was the first time the band had ever headlined a show in Nashville and telling the fans that the band had no excuse.  Although the band released the album “Wolves” last year, the set list swayed heavily in favor of the band’s earlier songs, including “Survive”, “Help Is On The Way”, “Chamber The Cartridge” and “Blood-Red, White & Blue”.  Several times throughout the set Mcllrath stood at the barricade, singing directly to the fans, shaking hands, high-fiving fans and even singing briefly with a crowd surfer!  The band was completely engaged with the audience this evening, giving them a proper headlining show that was 18 years in the making and the fans rose to the occasion!  Towards the end of the set, Mcllrath toned things down a bit, performing 4 songs acoustically- “Voices Off Camera”, “People Live Here”, Hero Of War” and the fan favorite “Swing Life Away”.   Midway through the acoustic set, Mcllrath told the audience how the band had recorded their last album in Nashville and had a blast!  He went onto say that he felt like a circle had been completed and that crowd this evening had assured him that there is a punk rock community/scene in Nashville.  He admitted that the country music scene can overshadow everything else in Nashville but it doesn’t represent what so many others in the city listen to.  He said he felt like a black sheep walking around while the band was in Nashville, but feeling that way is what got him into punk rock in the first place.  With the acoustic portion of the evening concluded, the band launched full force into “Make It Stop (September’s Children)”, followed by “The Good Left Undone”.  The band finished their set with “Prayer of the Refugee”, ending their first headlining show in Nashville on a high note.  The band promised to return and I imagine that is a promise the fans will hold them to!