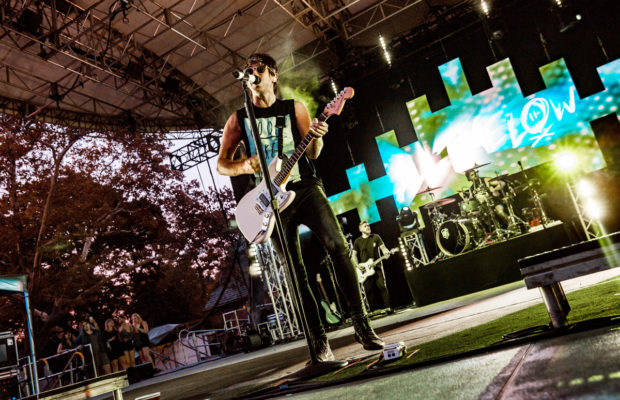 On the final day of July, New York’s Central Park was bustling. People were out and about enjoying the summer weather and in the heart of the park at Summerstage, the line for All Time Low’s concert stretched literally out of the park. Fans of all ages were gathering to see their favorite band perform their newest album, Young Renegades, live.

The sun was blistering hot as it hit the crowd who awaited the first band, The Wrecks, to take the stage. The band, who I had never heard of before, had such amazing energy and they were feeling the crowd too as lead singer, Nick Andersen, explained that this show was his favorite of tour so far. The band played a lengthy setlist which included “I Don’t Like You” and “James Dean”, and closing out with “Favorite Liar”.

The next band, Waterparks, have gained quite a following already. Chants erupted in the crowd before the band graced the stage and began playing “Mad All The Time”. Midway through their set, they explained one of their traditions on this tour to the crowd. The challenge was for Waterparks to leave the stage midway through their set and have the crowd chant for an encore. The band would then return, except it wouldn’t be an encore, it would be the remainder of their set (about 4 songs). Typical Waterparks — but the crowd did just that. Upon their return to the stage, Waterparks concluded their set with “Crave”, “Plum Island” and “Stupid For You”.

The final band before All Time Low’s arrival, SWMRS, had a few surprises up their sleeve. The punk rock band hailing from Oakland, California set the bar high as they opened their set with “Palm Trees” featuring Jack Barakat on guitar. The band was feeling the Manhattan crowd as drummer, Joey, jumped from behind his kit and splashed bottles of water on the crowd — a very welcomed move. SWMRS is known for never remaining silent on social justice issues, or any issues for that matter and that’s what I really admire about them. Before their song “Miley”, lead singer Cole Becker spoke to the crowd about being in control of our own lives and happiness (and threw in a little anti-government tidbit). As the sun was beginning to set over Summerstage, SWMRS had one last song, “Drive North”. As Becker was speaking to the crowd, the band’s latest guest graced the stage and strapped the guitar over his back: Finn Wolfhard from the hit TV show, Stranger Things.

While the crowd was overexcited about seeing a TV star, they were arguably more enthused by the sing-a-long to My Chemical Romance’s “Teenagers” that was happening just before All Time Low took the stage. Seriously, throughout the entire venue you could hear every person singing along. But when the song ended, it was time for the real show to begin. The lights dimmed and the band members took the stage as the intro to the title track off the band’s most recent album Last Young Renegade began. Screams erupted from the crowd as the bras began flying from the crowd to the stage — a staple of an All Time Low show. The band played a lengthy 20 song setlist which included the tradition of bringing fans (and this time a dinosaur) onto stage for “Time Bomb”, as well as one of the few live performances of “Vegas”. Other songs on the bands setlist included “Nice2KnoU”, “Something’s Gotta Give” and “Good Times”. The band then left the stage before returning for their three song setlist which included their hit song “Dear Maria, Count Me In”.

All Time Low are veterans in the pop punk scene and they have fans of all ages. For fans like my friends and I, we have grown up on All Time Low and they will always have a special place in our hearts. All Time Low is a group of seriously talented guys that are always putting out amazing music and doing amazing things for their fans. There truly is not another band like All Time Low out there.