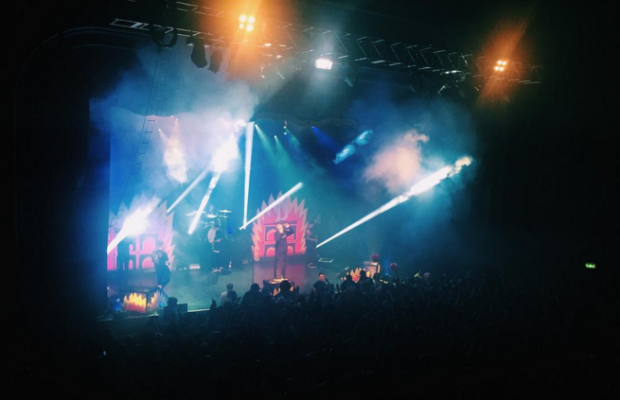 Since its introduction, the underdog of the music world has always been pop punk. Overlooked by mainstream media since the early 2000s, pop punk pioneers like New Found Glory, who introduced the genre to the masses in the early 90s, have all, but disappeared from mainstream music. This steady decline of pop punk in the public eye over the past few years caused many to coin the phrase “pop punk is dead.”

Fast forward to 2016, however, and the phrase has become pretty insignificant. For bands such as State Champs and Neck Deep, their success over the past year is proof enough that the scene is thriving and more popular than ever before.

Jam packed into the two story venue, there was not a single empty seat or spot in the crowd when State Champs took to the stage. Bringing the old school pop punk style back to life, they opened with “Secrets”, a track off of Around The World and Back, that set the tone for their ten song set.

Smiling and messing around in between songs, the tight-knit relationship between the members of State Champs is extremely present during their live gigs. The amount of energy they exert and the looks of happiness that appear when they hear the crowd singing their songs shows that State Champs have an incredibly strong core, something that will continue to help them be successful.

The energy during their set was the highest when singer Derek Discanio sang the opening lyrics to “All You Are Is History”, another track off of Around The World and Back. The crowd sang over Discanio, erupting into a full blown riot when the song kicked in. Fans were floating over the barricade faster than security guards could handle, the wall of crowd surfers continue to build up as the song continued.

Co-headlining tours can be tricky because there always appears to be an imbalance of who fans came to see. For this tour, however, it was clear that the crowd was there to see both State Champs and Neck Deep.

Like any audience you see at a pop punk gig, fans were soaring over one another as they crowd surfed, parting and running around in mosh pits, and singing over the musicians onstage.

As someone who attends a lot of pop punk shows, the interactions that occur between fans in the crowd during each set is a true testament to the type of community the pop punk scene has created.

Fans are picking each other up in the crowd and looking out for one another while making it their mission to be the loudest and most memorable audience the acts will see while on tour.

Closing with “Elevated”, off of 2013’s The Finer Things, the mass of kids on the floor followed the pop punk gig tradition. Shaking the entire venue as they jumped in sync with the music, the energy only seemed to increase amongst the crowd as State Champs finished off their set, getting everyone ready for Neck Deep.

Hailing from the UK, it was predicted well before Neck Deep took the stage that this London show was going to be one to remember.

Opening up their set with “Citizen of Earth”, off of the band’s latest album, Life’s Not Out To Get You, it was clear that Neck Deep was going to leave every ounce of energy they had on the stage.

Setting the stage with mounted platforms that gave the musicians the perfect view of the crowd and flame painted speakers that matched the artwork of Life’s Not Out To Get You, Neck Deep sought out to make their set as memorable and theatrical as possible.

When it came to selecting their setlist for this tour, Neck Deep did it right. Mixing upbeat songs like “Kali Ma” and “Serpents”, a song that caused a full blown circle pit to open up, with acoustic tracks, fans were able to hear all of their favorite songs that night.

Easily one of the most memorable moments of the set was the performance of “A Part of Me”. A track that is undoubtedly the favorite amongst the majority of Neck Deep fans, singer Ben Barlow took a step back from his role and really let fans make the song their own.

With the audience creating an intimate atmosphere with their phone lights, Barlow spent more time holding out his microphone to them than singing himself, the crowd taking on most of the song apart from when Hannah Greenwood of Creeper, one of the opening bands, came out to sing Laura Whiteside’s part. Ultimately, the performance proved just how passionate fans are for the music Neck Deep has produced over the years.

For the first of three encores, Ben Barlow emerged from the side of the stage alone and with an acoustic guitar in his hand. Appearing nervous in front of the thousands of people in front of him, Barlow muttered something about how idiotic the guys were for letting him perform a song by himself before starting into “Head To The Ground”. The humanizing moment for the frontman took everyone in the venue back to the beginning days of Neck Deep when it was just Barlow and his guitar.

After closing the show with “Can’t Kick Up The Roots”, Neck Deep decided to celebrate the end of their biggest show to date in style. Led by drummer, Dani Washington, the entire venue broke out into a full blown rave as club music filled the speakers and everyone apart of the tour ran onstage.

With beach balls bouncing throughout the crowd and everyone in the venue dancing along, the last moments of the State Champs and Neck Deep UK tour ended on the perfect note, fans leaving the venue satisfied and already eager to see the bands again.

Continuing their world tour in North America this week, it is clear that these guys won’t be slowing down anytime soon. With sold out shows around the world, State Champs and Neck Deep are bringing back to life a genre that many thought died long ago.

If this new wave of pop punk bands are anything close to being as successful as Neck Deep and State Champs have been over the past year, the revival of this scene just might be possible.

Perhaps pop punk isn’t so dead after all.