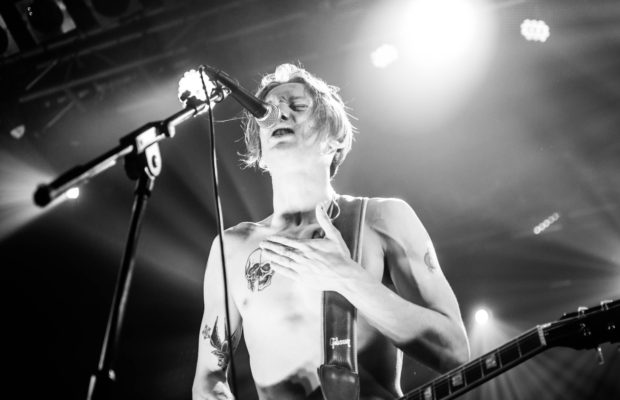 Check out the full gallery of photos from the performance here.

If this band isn’t on your radar, now is the time to pay attention. Hailing from the UK, Counterfeit’s a new hard-hitting punk rock band on the scene that has lyrics you’ll relate to, music you’ll love and a live performance you won’t be able to get enough of.

Packing the Electric Ballroom in the heart of Camden, Counterfeit opened up their set with a tribute to the late Prince, purple lights gleaming over the crowd, “Purple Rain” ringing through the speakers and everyone in the venue singing along.

Right from the very beginning of the night, frontman Jamie Bower proved from the minute the first note rung out to “Hold Fire”, a track off of their Come Get Some EP, that he is willing to give his all to entertain the crowd and captivate every single person that is in his presence.

Jumping off the stage and disappearing into the sea of people before the second chorus of “Hold Fire” even ended, Bower ended up on the other side of the venue, greeting all who came out to see the gig.

Keeping the energy up with their high tempo punk rock songs, it is very clear that every single musician in Counterfeit knows how to play their instrument and knows how to play it well. Right down to the vocal harmonies, they have perfected their live music performance down to the very last detail, making for an incredible show all night long.

“Letters To The Lost” was one of the songs during their set that really showed the true artistry behind the band. With the crowd forming a circle and Jamie Bower stepping into the middle of it with just his guitar and microphone, Bower introduced the song by discussing suicide prevention and how the track was written after a close friend of his committed suicide.

With fans surrounding him, singing the lyrics with as much meaning as Bower himself, the song seemed to bring everyone in the venue together during those few minutes. The performance was the most raw moment of the entire night – Jamie Bower’s gritty rock vocals and stripped down guitar mesmerizing everyone in the room. It was refreshing and different from the other tracks in their set and showcased the incredibly strong and thoughtful songwriting that goes into all of Counterfeit’s material.

“Addiction”, a newer track from the band, is a standout from the group of tracks performed that night. Filled with a catchy guitar riff and lyrics that follow into typical punk rock fashion, “Addiction” is just one of those well written angsty punk rock songs that anyone can appreciate and rock out to.

Their performance of “Come Get Some”, one of Counterfeit’s most popular tracks to date, was definitely a moment many in the crowd were looking forward to. Being the most energetic during this part in the set, the crowd sang along with powerful vocals during the chorus and restlessly moved along to the beat from beginning to finish.

With the ages in the crowd that night ranging from teenagers and beyond, Counterfeit is a band everyone can get something out of. If you are looking for a solid punk rock band who knows how to put on an unforgettable performance and write quality rock music, you know might to give these guys a listening to before they take off this year.

Check out our feature with Counterfeit where they talk about who and what inspired them to pursue a career in music here.

Keep your eyes peeled for our full interview with Counterfeit in the next week!