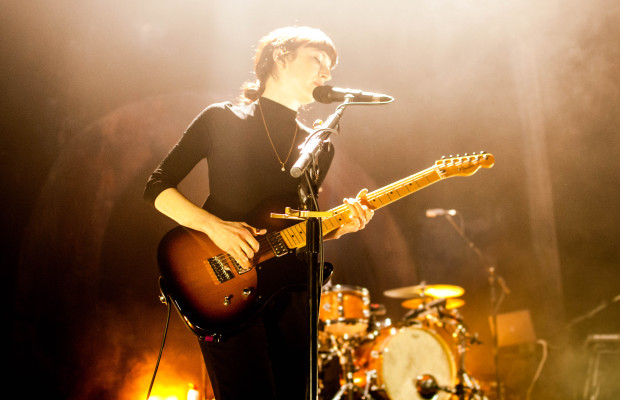 Every time Daughter comes through London, they always manage to make it quite the event. Having released their latest album, Not To Disappear, less than two weeks before their sold out show at The O2 Forum Kentish Town, everyone lucky enough to score a ticket was in for a special treat.

Having played a number of shows in London during their career and singer, Elena Tonra, hailing from North London, Daughter’s far from being a stranger to their London fans.

In fact, it is the passion within their fan base that has caused a sense of community, family even, to form at each and every show Daughter plays.

For their sold out show at The O2 Forum, many people mingling in the crowd seemed to, in one way or another, know each other from past Daughter shows. They were spotting each other in the crowd and embracing, waiting outside the venue in the cold together, and buzzing about Daughter’s new album that was released earlier in the month.

It is this sense of community formed within the Daughter world that has resulted in all of their London shows over the past year to sell out, making it nearly impossible to get a ticket and see the indie band.

Stepping out onto the stage a little after nine on the Thursday night, Daughter opened with “How”, a track off of Not To Disappear, an introduction to the night that proved Daughter sounds as good live as they do on their albums.

Even though the show gave fans less than two weeks to learn the new songs, the crowd was alive that night, singing along and respectfully watching Daughter recreate their favorite songs onstage.

The soft and powerful vocals of Elena Tonra echoed through the venue, silencing everyone from the barricade to the balcony. It can easily be said that I have never observed a crowd quite so entranced by a performance. The normal buzz of chatter heard from the bar and in the crowd was minimal, non-existent at some points, everyone completely in awe of the band onstage.

The passion and sheer skill radiating off of guitarist Igor Haefeli really stole the night, in my opinion. He was so focused on what he was performing, perfecting each sound coming out of his guitar with the pedals at his feet and the rhythm of his hands, that it almost appeared as if he was in a completely different world and unaware that he was in front of thousands of people.

The members of Daughter didn’t take too much time in between songs to chat to the crowd and when they did, their voices were often so soft and shy that many couldn’t hear them. While it is clear that the band is rather soft spoken and likes to focus on the show they are putting on, where they lacked in conversation, they made up in their performance.

While the band appeared to be a little rocky on their song “No Care” that requires an additional background rhythm they couldn’t quite get in time with, their sixteen song set list did not disappoint a single person in the crowd. Covering all of their releases and every fan favorite, the well chosen set of songs displayed Daughter’s artistry and ability to bring each of their songs to life onstage.

One of the most hauntingly beautiful moments of the night happened during “Smother”, a fan favorite off of If You Leave. As one of their most emotional songs, the entire room of over two thousand people went nearly silent during this performance, allowing the raw and powerful lyrics to fill the whole venue. A pin could have dropped and someone would have heard it. The amount of respect and attention fans gave during this song is a testament to how driven they are to Daughter’s music.

As it is at every Daughter show, hearing “Youth” is probably the moment most fans look forward to. As undoubtedly their most popular track to date, the crowd sang the loudest and gave the biggest round of applause for this song. At any point, Elena could have stepped away from the microphone and those in the audience could have sang the song from start to finish, showing just how much “Youth” has touched people.

During the performance, the band appeared the most appreciative of the crowd, Tonra giving a grin or two as she listened to the audience sing the words back with her.

Rather than having “Youth” be their encore for the night, the band made a rather odd decision to close with “Made of Stone”, a new track off of Not To Disappear. Swaying away from the path a lot of artists take when it comes to choosing an encore, many people in the audience did not know this song. However, the decision the band made became incredibly clear by the end of it.

As the track off Not To Disappear that most greatly reflects their past releases, “Made of Stone” perfectly encompasses who Daughter is as a band. Every single instrument is played to near perfection, creating a beautiful medley of haunting guitar notes and soft drumbeats. Tonra’s voice sings the lyrics with the amount of emotion she is known for, ultimately producing one of Daughter’s best songs to date.

The night was filled with a lot of different feelings – some were crying in the crowd, others were smiling big as Daughter kicked it into one of their favorite songs. Nevertheless, everyone in the venue walked away that night with a greater appreciation for Daughter as both lyricists and musicians.

While they have no new scheduled dates in London just yet, it can be said that their fans will always come out and support them. Whether they are playing St. John’s-at-Hackney to a couple hundred people or The O2 Forum Kentish Town to a few thousand, Daughter will always have a tight community of fans in London to come back to.

The photo gallery from Daughter’s performance can be viewed here.