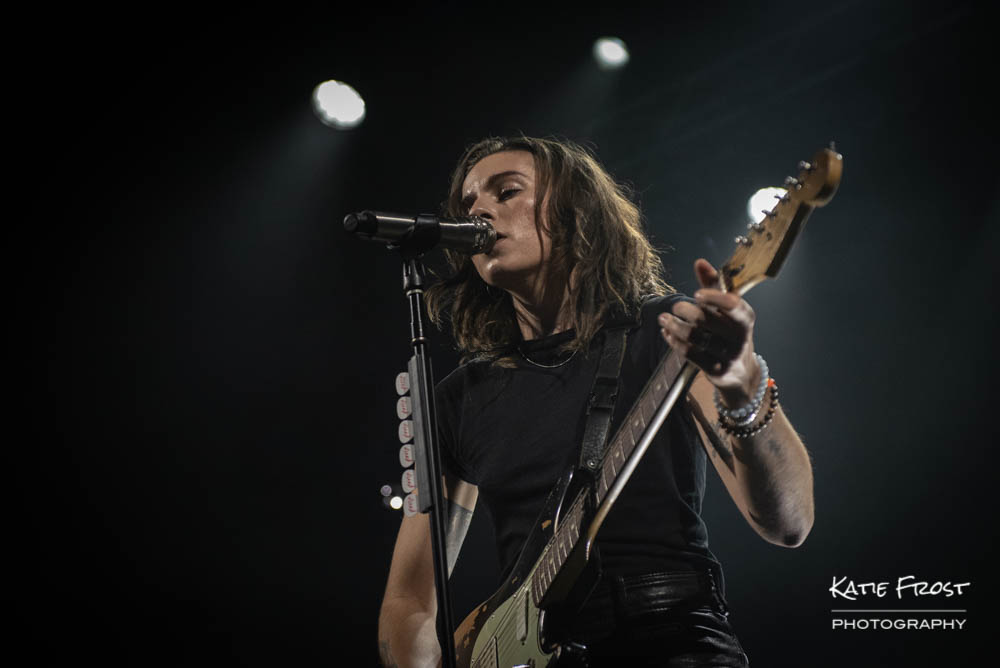 This gig was the last of three very special UK shows being played by PVRIS, the first two having taken place in Manchester and Glasgow. When tickets for these shows went on sale back in August 2019, they sold out within seconds, and I was very lucky to get a ticket. This was my first time at the 1,500-capacity Electric Brixton and, having been going to gigs in my home-town of London since 1999, it was nice to discover a music venue I haven’t been to before! I really liked the juxtaposition between the striking blue and gold original features (expertly restored from the venue’s past) with the shiny new glitter balls.

I haven’t seen PVRIS live since they played Brixton Academy back in November 2017 touring their most recent full-length album All We Know Of Heaven, All We Need Of Hell (AWKOHAWNOH) which had been released earlier the same year. The band had been relatively quiet since then, until they released their Hallucinations EP in October 2019. These five new tracks have a more dance vibe than the band’s previous two albums, but still retain the classic dark electro-pop / alt-rock PVRIS sound.

From the band’s debut album White Noise (2014) and throughout the era of AWKOHAWNOH, PVRIS have employed a strong black and white aesthetic. This all changed with Hallucinations, which features colour artwork (gasp). The last few times I have photographed the band I felt compelled to edit the photos to be black and white as they just seemed to just look odd in colour, but with this new era it felt right to show the band as they really were – in full colour! Another recent change was the (amicable) departure of the fourth member of the band who never quite was – drummer Justin Nace – last month. I always loved watching Justin drum and it was odd not to see him on stage this time round alongside Lynn Gunn (guitar and vocals), Alex Babinski (guitar), and Brian MacDonald (bass).

The room was packed with fans and there was a huge roar of excitement when PVRIS took to the stage at around 9:15pm and launched straight into “Whats Wrong” from AWKOHAWNOH. The band looked happy to be back in London and playing a sold-out show in such an intimate venue. I was lucky enough to be at their first ever London show back in 2015 when they played the 200-capacity Barfly (now Camden Assembly), so it has been great to watch them grow over the last five years.

PVRIS played a great set featuring tracks from AWKOHAWNOH and White Noise, plus “Hallucinations”, “Old Wounds” and “Death of Me” from their Hallucinations EP. These new songs fitted in seamlessly with their older material. They ended their brilliant set with one of their most well-known songs – “My House” and there was a great atmosphere in the room as the crowd jumped around and sung the words at the top of their lungs. A triumphant return for PVRIS indeed. I look forward to hearing more new music, and continuing to follow their musical journey. After these three intimate shows in the UK, PVRIS will play a handful of shows in Europe, before heading off to support Halsey on her US tour in July.

Support came from New York indie-rock band Joywave, who I had not seen live before. Band members Daniel (vocals), Joseph (guitar), Benjamin (keyboards), Paul (drums) and Kevin (bass) were all dressed in white, and put on a lively performance. The band’s third album Possession will be released in early March.

PVRIS Set-List:
What’s Wrong
Smoke
St. Patrick
Half
Mirrors
Holy
Heaven
Hallucinations
Anyone Else
You and I
Winter
Old Wounds
—
Death of Me
My House