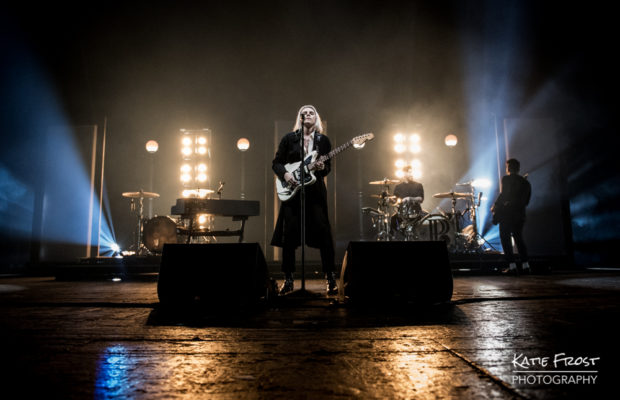 All We Know of Heaven, All We Need of Hell

Katie headed down to catch Massachusetts alt-trio PVRIS play the last of five UK headline shows in support of their latest album, All We Know of Heaven, All We Need of Hell (released in August 2017).

First on stage was TYNE [https://www.facebook.com/OfficialTyne/] from Cambridge. The 19 year old initially looked tiny on the huge stage, but as she got into the swing of her performance she began to own the stage as her dreamy chill-pop won over the crowd. She played a great set featuring original songs as well as a beautiful stripped-down cover of “Avalanche” by Bring Me The Horizon, which she performed on keys, and ended her set with latest single “I’m Down”.

Next up were Nashville four-piece COIN [https://www.facebook.com/thisiscoin/] who treated the crowd to tracks including “Talk Too Much” from their album How Will You Know If You Never Try which was released earlier this year. Front-man Chase was bouncing around the stage almost constantly and their set was full of energy from the very start. The crowd seemed to enjoy their lively performance and, for me, they were a lot of fun to photograph.

At around 9.30pm the lights went down and a roar of excitement came from the crowd as PVRIS took to the stage, opening their set with “Heaven”. Lead singer  Lyndsey Gunnulfsen (Lynn Gunn) not only sang but played keys and guitar at various points throughout their set, accompanied by Alex Babinski on guitar, keys and backing vocals, pint-sized Brian MacDonald on bass and keys, and their touring drummer the mighty Justin Nace. They played a beautifuly haunting stripped-down version of “Same Soul”, which is one of my favourite tracks on the band’s second album All We Know of Heaven, All We Need of Hell (AWKOHAWNOH).

I really enjoy AWKOHAWNOH and have been looking forward to seeing some of the tracks played live since its release back in August. The album has strong themes of heartache and anxiety and, for me, has a much darker sound than the band’s debut release White Noise (2014). Lynn has a fascination with the dark and supernatural that shines through in everything from the band’s videos to the underlying themes of both records. She is also heavily involved with the design of everything from album covers to merchandise, which reinforces the strong and recognisable aesthetic that PVRIS have had from the very start. The themes of darkness and the macabre are carried through into the band’s live show; with everything from the lighting to the video screens on stage.

The band seemed genuinely grateful to their UK fans for all their support and for taking them to where they are today. I was lucky enough to witness PVRIS’ very first London headline show in 2015 which saw them sell out the 200-capacity Barfly in Camden (now called Camden Assembly). The hype around the band was huge from the start, and it is not entirely surprising that just two years later they were playing to 4,000+ people at Brixton Academy – their biggest headline show ever! It was great to see how the band have grown in such a short space of time, and they put on a compelling performance with their signature mixture of rock and emotive synth-pop with bold hooks and arena-sized choruses. But where can they go from here – perhaps next time I go to see PVRIS live it will be at The O2 Arena or Wembley Stadium, you never know!

Photos and words by Katie Frost