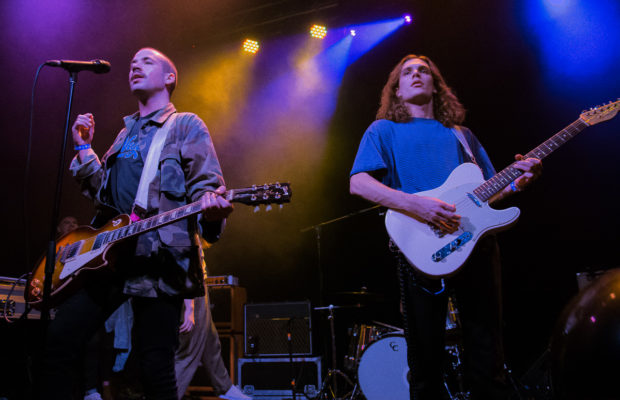 Louisville, Ky based garage punk band White Reaper played a hometown show recently to a sold out crowd of family, friends and fans!  Having recently released their newest album, The World’s Best American Band, the band is currently touring in support of the album.  Headliners is a fairly small venue, lending an intimate feel to the evening.  The band was in great spirits, feeding off of the wonderful and positive energy that filled the venue, expressing their gratitude for their fans’ continued support over the years.  White Reaper has always been very interactive with the crowd, this night being no exception.  With large balloons being tossed around the crowd, confetti being propelled into the crowd at the beginning and end of the set and plenty of crowd interaction, the fans were treated to an incredibly enjoyable set.  The band performed plenty of songs from their new album, as well as a few older ones, giving the crowd a nice mix of songs to sing along to.  The crowd was jumping up and down, singing, dancing and crowd surfing throughout the entire set.  It was obvious that both the band and their fans were having a great time!  Towards the end of the set, singer/guitarist Tony Esposito and drummer Nick Wilkerson asked for the crowd’s participation in helping them to crowd surf back to the bar so they could take a shot and then crowd surf back to the stage.  Whichever one made it back to the stage first would be the winner, and unfortunately for Tony, Nick made it back first. He was a good sport about it!  The band gave a fun and energetic performance and showed why they are one of Louisville’s favorite hometown bands!