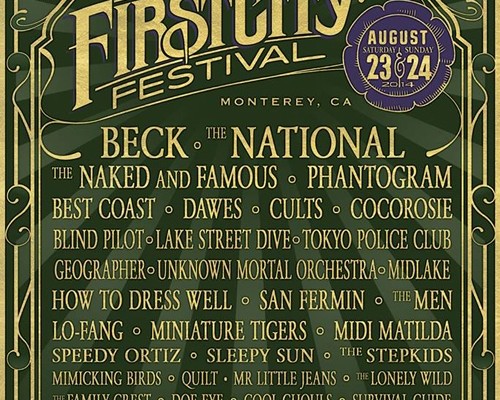 California’s First City Festival is right around the corner and Stitched Sound writer Alessandra Mowry is giving you the inside scoop on what to expect this year:

First City Festival 2014 is an event I have been looking forward to since I left First City Festival 2013. After the cessation of the Monterey Pop Festival in 1967, the music scene south of Santa Cruz stagnated. Now Monterey, in collaboration with Goldenvoice, is being restored to its former Pop-Festival-Era glory. First City is proving for the second year in a row that it might just be the new coolest California festival.

While Coachella and Outside Lands have made a name for themselves in pop media, First City distinguishes itself from other festivals by not only having two days full of hip music, but also a carnival, with rides and games included in your ticket. There are stages throughout the fairgrounds for Vaudeville acts, which just adds an air of magical realism to the scene. To top it all off, there are two days full of really awesome acts, including headliners Beck and The National, who are exclusive to First City this year.

I’m personally excited for the up and coming Bay Area bands being featured this year, such as Cool Ghouls, Sleepy Sun, Midi Matilda, and The Family Crest (check them out on their Bandcamp pages). Festivals are great platforms for these fresh artists to get recognition, and also for music fans to discover music that may not be available on Spotify or iTunes.

I also appreciate First City’s lineup because it is much more cohesive than many other lineups I’ve seen this summer. Almost every band adheres to First City’s ethereal California folk theme, an atmosphere that’s difficult to describe if you’ve never experienced it. The fairgrounds themselves are filled with California live oaks, and the main stage is an off-season rodeo corral, yet Frye ankle boots far outnumber cowboy boots. You can expect to go home very dirty since the fairground floors are dirt, which is all part of the fun.

Single day tickets to First City are available on their website,www.firstcityfestival.com.