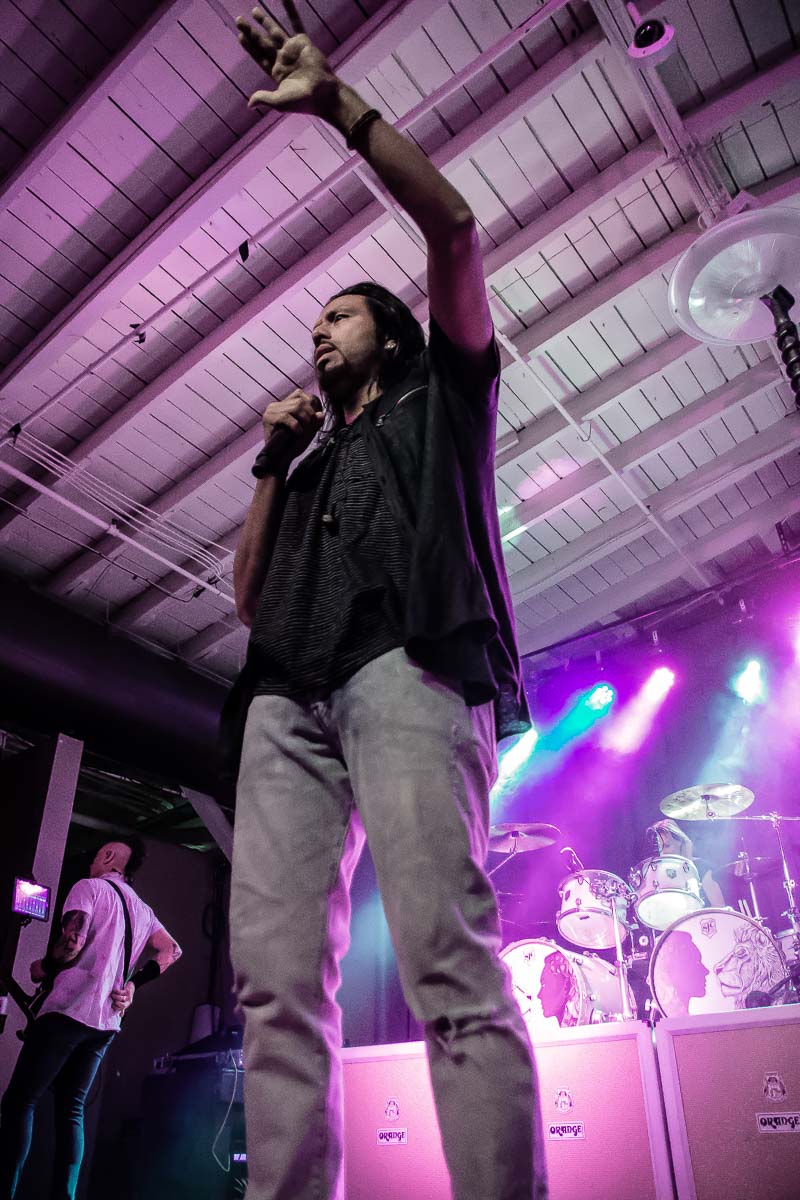 Manchester Music Hall in Lexington, KY was packed with rock fans recently who were camped out before doors to experience one of their favorite bands- Pop Evil!  The Michigan based hard rock band rolled through town, having toured heavily over the past year in support of their most recent album Pop Evil.  With a live show that its always bursting with fun and lots of energy, they have definitely become a fan favorite since forming in 2001.  The crowd burst into cheers as soon as the band came out on stage, ready to sing and dance and have a great time.  With a set list that included “Boss’s Daughter, “Hero”, “Torn To Pieces”, “Ways To Get High” and the crowd favorite “Footsteps”, the band sang plenty of newer songs and older fan favorites.  Singer Leigh Kakaty chatted to the crowd often this evening between songs, telling them “You’re unbelievable tonight!  It’s time for an old school Pop Evil song.  Let’s see if you remember it!”, before launching into “Monster You Made Me”, a song which the crowd most definitely knew all of the words to!  Kakaty was all smiles, thanking the crowd for singing along.   Pop Evil is the very essence of a live band and they love their fans, expressing their gratitude for their fans’ support over the years at every show.  Bassist Matt DiRito, rhythm guitarist Dave Grahs, and lead guitarist Nick Fuelling are always incredibly engaging with the crowd, with this evening being no exception.  Drummer Hayley Cramer is a ball of energy on the drums and enables the crowd from her drum kit, as well as her fellow band members.  Standing at the edge of the stage to play and sing directly to the fans, encouraging them to sing along and put their hands in the air, is part of what makes a Pop Evil show so much fun!  They want their fans to have a good time and make sure that they do!  After leaving the stage at the “end” of their set, the band came back out for an encore with Kakaty thanking the crowd for staying and telling them that they could be anywhere right now but they were there.  He went on to thank his fans for their support from day one!  He then said “This is my favorite part of the show.  Some people left already.  They heard “Footsteps” and decided to leave, but those of you who don’t care about having to work tomorrow want to rock and roll tonight!  You stayed!  We’ll play a little longer for you tonight”.   The band then launched into the oldest song in their catalog, “100 in a 55”, which saw the crowd sing along at full volume.   Ending the show on a high note, the band brought out members from the two opening bands, stating “This is what touring is all about!  We’re like family”, ending the show with their hit song “Trenches”.  It seemed fitting that they ended their song with a party on stage!  They gave their fans an incredibly fun night of music!  Canadian rock bands BRKN LOVE and Royal Tusk opened the show.