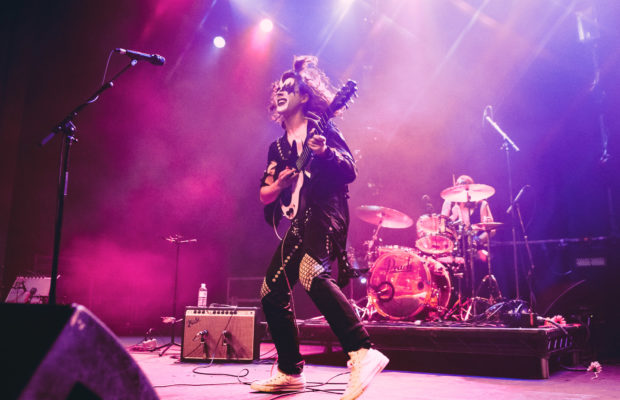 Over the past year and a half Peach Pit have been on almost non-stop tours around Canada, the US, and Europe, making everyone in Vancouver extremely proud. So it’s no surprise that they’re biggest hometown show (and second annual Halloween show) to date completely sold out.

First up for the night was another one of Vancouver’s sweethearts, Haley Blais, with her ukulele-pop and killer personality. Due to a mixture of this also being her biggest show and her newly and temporarily acquired long, blonde hair she seemed absolutely unstoppable and full of infectious energy. Her twinkly, airy sound perfectly overlays her mildly mundane and depressing lyrics about removing photo tags on Facebook among other things. Synchronizing dance moves and 70’s style costumes with the band, as well being generally delightful, especially when the entire audience start jumping to the songs, Haley Blais was a perfect way to start off the night.

Nashville-ians (…Yuhp. We’re going with that…), Sun Seeker, were up next, and it’s easy to see why they are touring with Peach Pit. Their psychedelic indie-rock sound works wonderfully with the home-town boys chewed bubblegum pop sound. And they were definitely a crowd favourite. It could be because of the Halloween vibes, or maybe that’s just how they are, but Sun Seekers stage presence came off as very spooky and mysterious, despite they’re grainy upbeat sound.

After much anticipation, it was finally Peach Pits turn on stage. Decked out in Kiss-inspired makeup and outfits, the boys ran on stage to a massive uproar of cheers. Immediately kicking the show into high gear, they started off with Techno Show, Sweet FA, and Drop The Guillotine, while Chris (guitar) and Peter (bass) dancing around the stage and Neil (vocals/guitar) flipping his hair around. There is some sort of feedback loop at Peach Pit shows, where the crowd and the band are just feeding off of each others insane energy, and this show was one of the craziest they’ve had (in Vancouver) in a very long time. It’s not really surprising though since so much has happened since their last show here (touring almost non-stop, signing a contract with Columbia Records to name a couple…)

They also played a couple new songs, Am I Your Girl and Live At The Swamp, which is refreshing to hear from a band that has been playing the same 13 (amazing, wonderful, perfect, splendid, bops of) songs for a year and a half. The songs fit perfectly in the bands already existing lineup while also sounding like a new step forward. It brings a new excitement to see where they go next.

Something that hasn’t changed, however, is the bands love of being inside or on top of the crowd. Usually, there’s a solid crowd surf with a mildly awkward landing back on stage, but due to the photo pit and the venues dislike of crowd surfing, this one lasted a good 30 seconds before Neil was back on his feet. It was worth a shot. It was made up for by the fact the Mikey (drums) pulled out his harmonica and had the most epic solo possibly ever. (Mikey, if you’re reading this. Don’t “leave it in the van” ever again. OK, thanks)

The boys in Peach Pit have been working tirelessly for the past year and a half, and it feels like this show was a sort of culmination of all of it. Their way of saying “Hey look what we’ve done, Vancouver!”. Their North American tour is almost done, but they’ve got a few more shows left in California, finishing up with a two night run in Long Beach, CA on November 3rd and 4th. If you’re anywhere near San Francisco, LA, or Long Beach you need to go see these boys, and their buddies in Sun Seeker and Ponytails!