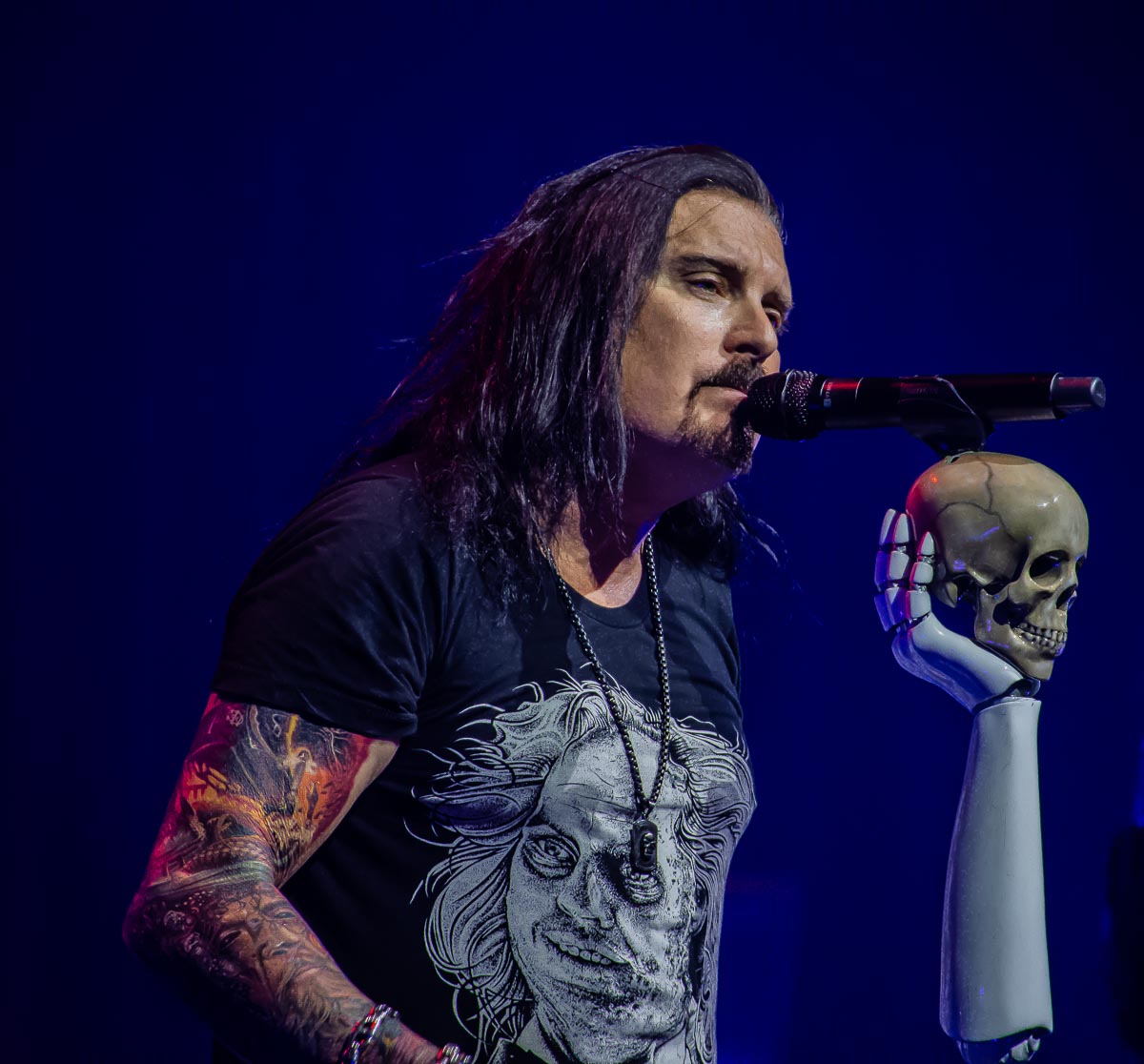 Iconic progressive metal pioneers Dream Theater began the most recent leg of their popular Distance Over Time Tour in Louisville, KY.  This tour has seen the band perform their seminal concept album Metropolis Part 2: Scenes From A Memory in it’s entirety, along with a setlist that featured tracks from their latest release Distance Over Time and other selections from their 30 year career as a band.   Although many concerts include opening bands in addition to the headlining band, this tour sees Dream Theater performing with no other bands on the bill.  With a show that stated at 8pm this evening, the band performed for close to 3 hours, with a 20 minute intermission included in the set.   Although not sold out this evening, the theater was filled with a sizable number of fans, many of whom wore their delight at seeing these icons plainly on their faces!  As the lights dimmed, the crowd started cheering in anticipation of the performance to come.  With a screen set at the back of the stage, sci-fi imagery started playing of robots looking through the band’s extensive catalog of albums, with the lights then coming on and the band appearing on stage.  The band started out the evening with Act 1, that included a sampling of songs from Distance Over Time that included “Pale Blue Dot”, “Untethered Angel”, “Barstool Warrior” and “Paralyzed”, as well as older tracks that included “A Nightmare To Remember”, and “In The Presence Of Enemies, Part 1”.   With stairs on both sides of the stage that were connected by a walking platform behind the drum kit, singer James LaBrie spent time on the stage, as well as on the platform.  The level of musicianship that LaBrie, guitarist John Petrucci, bassist John Myung, keyboardist Jordan Rudess and drummer Mike Mangini show is incredible.  They are true craftsmen of their instruments and had their fans in the crowd in awe throughout the evening.  LaBrie chatted with the crowd a bit throughout the first act, telling them “Welcome to the Distance Over Time Tour and the first show of the North American Tour!  Well, we call it the North American tour but there are only 2 shows in Canada and they’re pissed ha!  We’ve been touring in support of this album for a while and are having a great time”!

Following a brief intermission, the band came back out for Act 2: Metropolis Part 2: Scenes From A Memory, their popular 1999 concept album that was celebrating it’s 20th anniversary.  The second act started out with an intro video playing on the screen before the band came back out, starting with the album’s first track “Regression” and creating excitement with the crowd as they continued with each song on the album.  They ended their set with their live premiere of the Distance Over Time track “At Wit’s End”, a song that many of the fans in attendance were happy to see the band add to their live setlist!  The band is in top form on this tour!  Mangini was killing  it on his insane, two-tiered drum kit that had cymbals above and below him, LaBrie’s voice sounded incredible and Petrucci, Myung and Rudess were showcasing their incredible talents on guitar, bass and keys, respectively!  They showed this evening why they are one of the world’s most loved Progressive metal bands and anyone who had not seen them before, left this evening as a new fan.