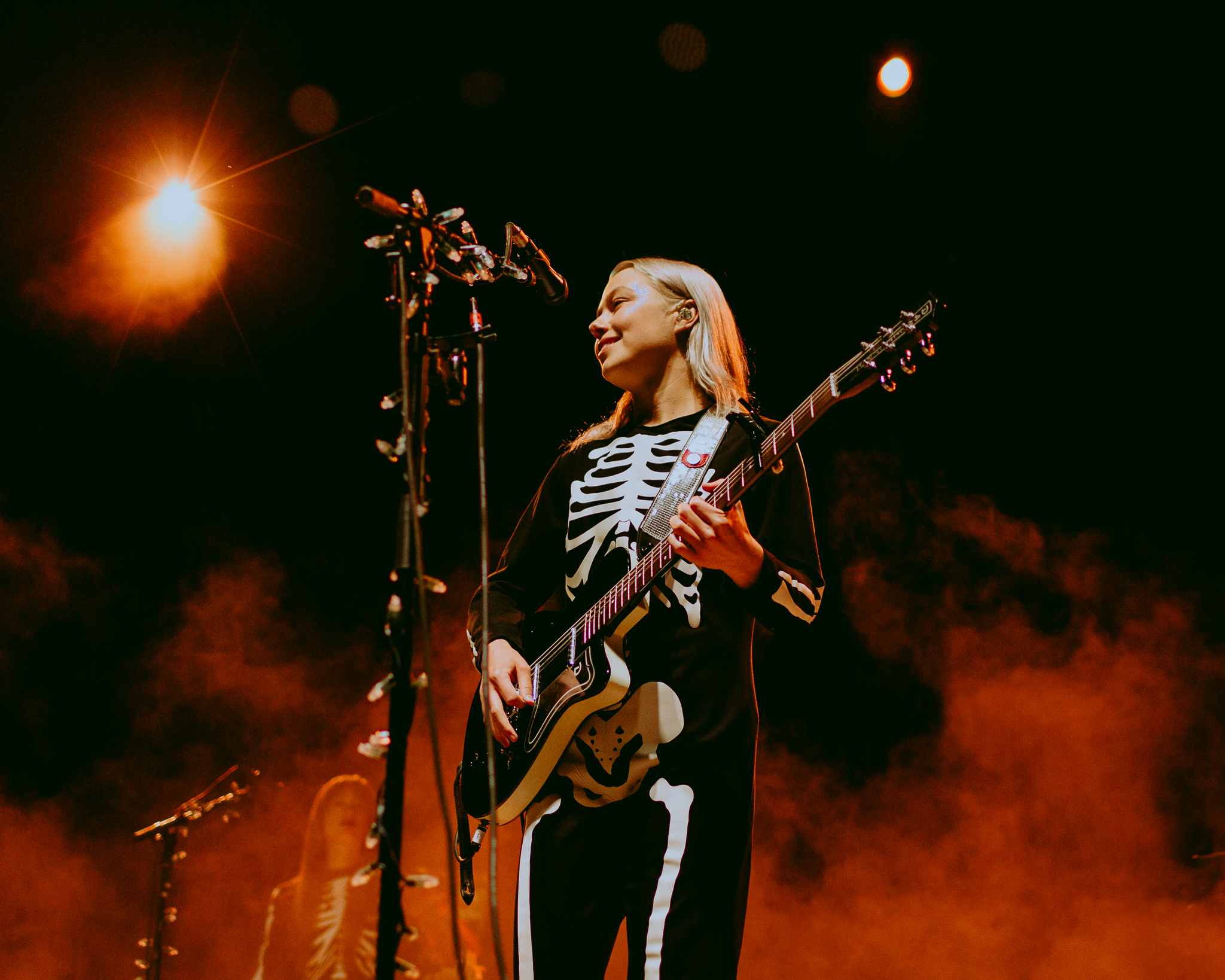 In the past year, Phoebe Bridgers has been the talk of the town – collaborating with artists like The 1975, Maggie Rogers, Kid Cudi, and Christian Lee Hutson, as well as making her Saturday Night Live debut. However, fans and critics alike cannot withhold their excessive acclaim for her greatest musical accomplishment to date – 2020’s Punisher.

With that being said, since the album’s release, the anticipation leading up to a live tour from Bridgers has been through the roof – and she has lived up to every bit of it. Bridgers’ current Reunion Tour with special guest MUNA is off to a spectacular start. A tour centered around comfort and solace, it is a must-attend for folks of all ages.

On a Wednesday night in September, post-lockdown, with folks back to in-person jobs and classes, one would not expect to find such a packed event happening, but Bridgers is the exception to every rule in cases like these. The TCU Amphitheater at White River State Park in Indianapolis had never looked as peaceful, even with a crowd of thousands pouring in from every entrance. Folks of all ages, from young teens with their parents, to college kids with their friends, to older couples out on date night, were lined up with bells on (and masks on) for the night’s events.

The lawn was covered in quilts and picnic blankets, Doc Martens and cardigans slipped off and tossed into the grass, lawn chairs spread out. The pavilion seating was filled up by sunset as well, with plenty of folks sporting cans of Liquid Death (which turns out to be not a hard drink, but canned spring water), and tons of people were packed into the pit.

Before the sun could finish setting behind the amphitheater, the clock struck eight, and out came MUNA. An electro-pop alternative force of nature, the trio consisting of Katie Gavin, Josette Maskin, and Naomi McPherson, plus their touring band, hit the stage with an energy to be reckoned with.

Spinning, glimmering, dancing onto the stage, every member of the band was so full of vibrant energy from the second their set started, and it did not stop for a beat. Between Katie’s twirls and spins, Josette’s running and jumping across the stage, and Naomi’s head-banging, the three are truly unmatched joy come to life.

Performing fan favorites like “Number One Fan,” “Pink Light,” and notorious hit “I Know A Place,” the band knew exactly what the crowd needed to get riled up for Phoebe’s set in the best way. They also performed the live debut of their newest single, “Silk Chiffon,” featuring the woman of the hour herself, Phoebe Bridgers, which saw a huge response from fans – dancing, screaming, singing, and everything in between.

Katie at some point referred to their set as a “buffet of genres,” which is definitely true. Their energy and sound throughout the night really did feel like everything from Y2K country-pop (The Chicks and The Wreckers) to The Cranberries – it all felt like being in a coming-of-age movie in the most fantastic way. Very few bands have the level of chemistry with one another and with their audience that MUNA do.

Following MUNA’s performance, the air felt absolutely electric with the buzzing from the crowd – all in anticipation of Phoebe’s set. And once the lights went down? The energy was unmatched as our storytelling songstress took the stage.

With a stage drenched in rolling smoke, and a band of skeleton people (yes, skeleton people) – a violinist, pianist, trumpeter, among others, Miss Bridgers came forward to meet a chorus of cheers and screams and laughs and tears.

Under a few golden spotlights, her set began with an old favorite – “Motion Sickness,” off of her first album, Stranger in the Alps. Following this introduction, the background of the stage was lit with a projection of an old storybook titled Punisher, after Bridgers’ most recent release.

For the remainder of her set, Bridgers took her audience through “chapters” of said storybook, each song beginning with the storybook page turning to a new pop-up scene, each scene based on the next song on the album (with a few other songs included as well, “Smoke Signals,” “Scott Street,” “Me & My Dog,” among others).

Aside from the storybook (and the Christmas lights wrapping Phoebe’s mic stand), the only other lights on stage were projected onto Phoebe and her band, and angled to cast their silhouettes onto the ceiling and walls of the amphitheater. This truly made the set feel like watching a film or a theater performance as opposed to a run-of-the-mill concert – and it was magnificent, like magic in a folktale.

Phoebe’s fanbase was more than familiar with her performance style as well, and it was clear that they felt right at home. Everyone’s attention was so intently focused on Phoebe – a crowd of seven thousand is almost never silent, but there were points in the night when anyone in the audience could have heard a pin drop – a level of reverence for the artist onstage that is so rare it is almost unheard of.

Contrarily, fans also had no problem laughing and joking along with Bridgers all night long. During “Smoke Signals,” the crowd’s singing was fairly gentle and quiet, until the lyric “With you riding shot-gun, speeding, ‘cause fuck the cops,” at which point everyone screamed the latter half of the line, before bursting into laughter.

Another moment of the night that felt like a wonderful inside joke was at the point where Phoebe decided to dedicate a song “to [her] boys,” and then felt the need to clarify – “I mean my friends, not men,” and everyone chuckled again.

Phoebe Bridgers is such a refreshing artist in that she is so blatantly honest with her fans – something that is hard to come by and is always appreciated. A little over halfway through her set, she introduced her song “Funeral,” by telling fans “this song is what happened when [she] didn’t leave my apartment for five days before it was cool,” and then made sure to mention that feeling that way is not okay and she has since then gotten help, to which the crowd cheered greatly. Bridgers’ ability to be honest with fans in this vulnerable way will never go unnoticed.

Between all of the above, and the grand finale of Punisher, “I Know The End,” the Reunion Tour is one fans will be talking about for years to come. Under a sky full of stars, with a string of stories being told to some of the most somber and sweet melodies, Bridgers put on the most memorable performance. With the violin and trumpet notes wrapping the crowd in unescapable waves of emotion, and spotlights forming flower petals and clouds across the sides of the stage, the set was something so raw and real, while also being so much like a fairytale. And then, with a song so full of crescendos and screaming and smoke and crashing instruments and energy, we saw the end. Phoebe let us know the end was there, and we all began to say our goodbyes. There is truly no one like Bridgers, and no performance like that one.