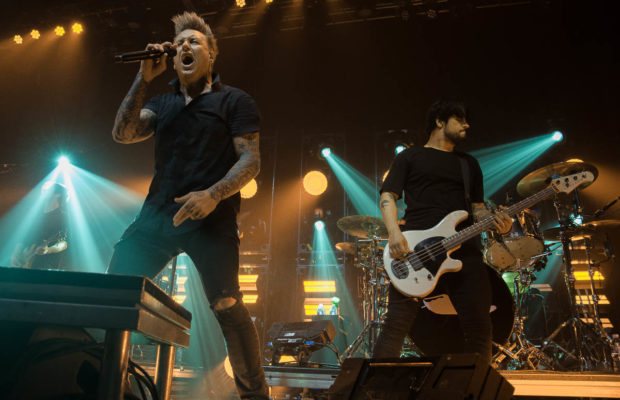 Papa Roach with Nothing More and Escape The Fate

Currently on tour to support their latest album Crooked Teeth, Papa Roach made a stop in Louisville, KY, performing to a sold out crowd.  As doors opened for the show, the long line of fans poured into the venue, many of whom were hoping to get as close to the barricade as possible.  A banner of the Crooked Teeth album cover, large enough to cover the entire front of the stage, was secured into place before the band took the stage.  As the lights dimmed, a voice came over the intercom announcing “Can I have your attention please.  Audience participation is required. Repeat after me-fuck Papa Roach”.  The lights then came on, with the silhouette of the band visible behind the banner.  As the banner dropped, the band immediately launched into “Crooked Teeth”.  Papa Roach is an incredibly fun and high-energy live band, with constant interaction amongst themselves and with the audience.  Singer Jacoby Shaddix is a dynamic front man.  He had a great deal of fun on stage and with the crowd, often standing on a platform that was stationed at the front of the stage.  The crowd was having a great time, waving their hands in the air, singing and dancing for the entire set.  During many songs throughout the set, Shaddix led the fans in frequent sing alongs to which they happily obliged.

A few songs into the set Shaddix greeted the audience, thanking them for selling out the show and for supporting rock and roll.  He then asked “Do you want some more Papa Roach?  Do you want some old school Papa Roach?”.  The band then performed their 2000 hit Snakes, with the old school Papa Roach fans singing along.  Singing a variety of hits, such as “Help”, which Shaddix mentioned was one of the saddest songs the band ever wrote, “Between Angels and Insects” and “Periscope”, as well as an amazing cover of Song 2 by Blur, the band had the crowd in high spirits all night.  Chatting often with the crowd between songs, Shaddix mentioned that he was always the person at shows who started a mosh pit, telling them to play nice but rough.  He told them it was time to take the show to the next level and and start a mosh pit, telling the crowd that their energy was awesome.

Towards the end of the set, the band performed their 2006 hit “Forever”, transitioning to “In The End” by Linkin Park.  Shaddix mentioned how he and Bennington had been friends and that he had struggled with many of the same issues, with things from his childhood that had messed him up into adulthood.  It was a moving tribute to his former friend.  The band then performed “Falling Apart” and ended their set with “Born For Greatness”.  As the fans erupted in applause, Shaddix stood at the front of the stage and smiled, giving the fans a round of applause in return.  After exiting the stage briefly, the band came back out for a 3 song encore, starting things off with “Scars”, followed by “None Of The Above”.  The band ended their set with their smash hit “Last Resort”, much to the delight of the fans, who were once again led in a sing along.  After the song ended, the band all lined up next to each other and took a bow as the audience chanted “Papa Roach”!  Papa Roach treated their fans to an amazing and energetic night of music, dancing and sing alongs!  Escape The Fate and Nothing More opened the show.