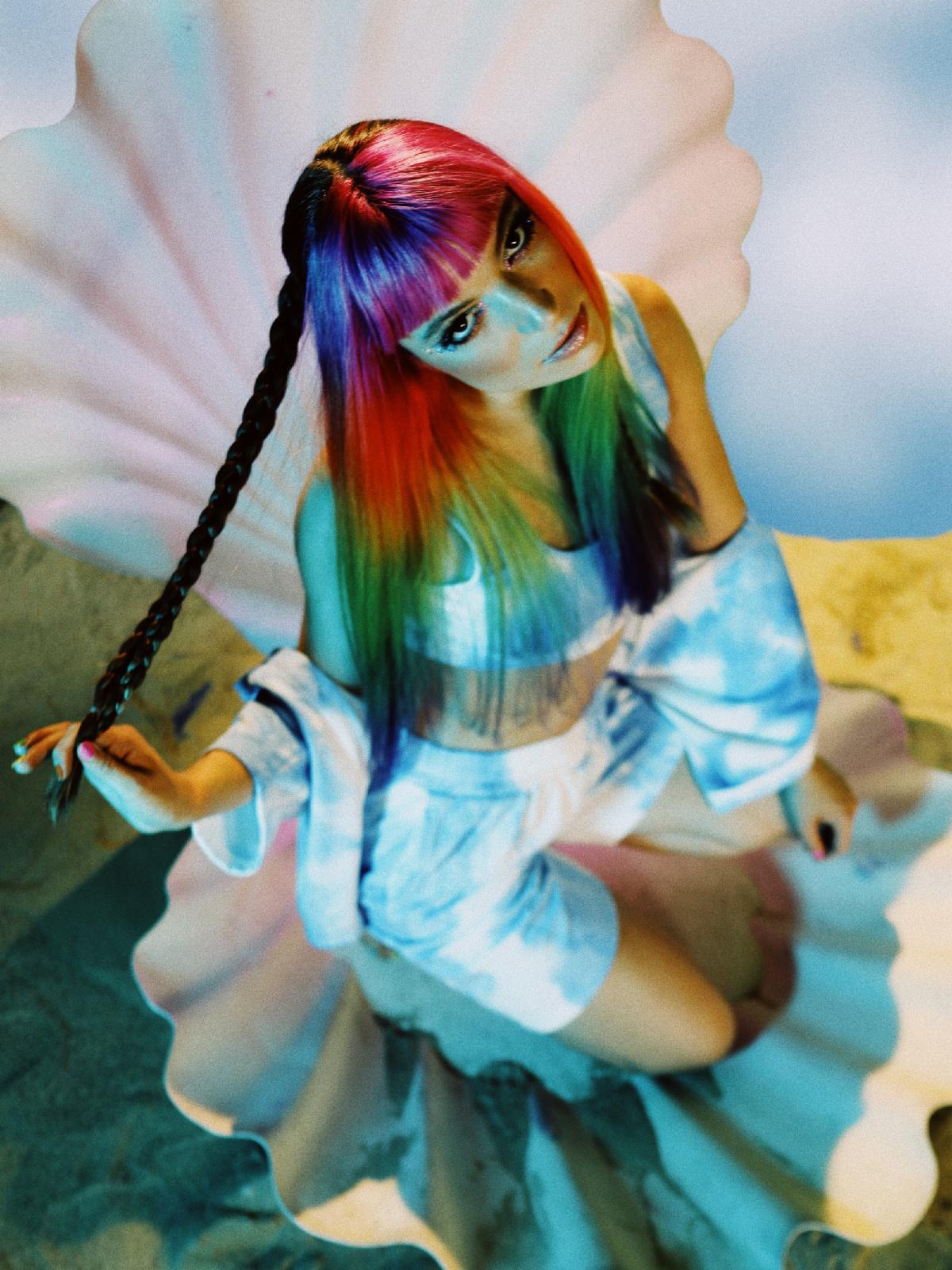 Following her debut festival performance at BottleRock Napa Valley last weekend, emerging pop artist Molly Moore has teamed up with artist, producer, and friend NoMBe to release new single “Marco Polo,” a true story about meeting someone you can escape reality with while struggling with deciding whether to dive head-first into the relationship or continue testing the waters.  The track is a swirling blend of harmonic bliss accompanied by bright layered beats and lush synths — with a splash of bossa nova — and is the second single from Molly’s forthcoming EP, Escapism, Part 1, out this fall.  “This song is a collaboration with my very good friend NoMBe.  I’ve been a huge fan of his work for a while and it was such a pleasure to be able to have him co-produce this song,” Molly shares.  “We’d both been really inspired by Brazilian music and I think you can hear that influence on this track especially.  “When Molly sent me the original demo I knew it was something special.  I could tell that her theme of escapism really shined through and me living in Hawaii gave it the perfect backdrop to fit into our worlds,” NoMBe adds.  “We’ve also both been heavily inspired by this Brazilian-bossa feel.  I thought it might benefit from a few more production touches like the acoustic guitar and sound design and after some back and forth we decided to let me try a verse, too.  It came out great and I can’t wait to see everyone’s response!”  “Marco Polo” joins Molly’s previously released single “Do They?” on Escapism, Part 1 as she blurs the lines of genre, creating a multi-layered house party atmosphere and addresses the highs and lows of being in love with someone you can’t be with in a traditional sense.  On “Marco Polo,” Molly touches on the concept of escapism which inspired her new collection of music as she unknowingly escaped her own process of self-growth by focusing on external relationships and avoiding the uncomfortable realities about herself.

With each of her previous releases Molly has continued to embrace the changes in her life from experiencing loss with the passing of her father and ending a five-year relationship to searching for her voice and finding the light within.  That is no exception for Escapism, Part 1.  The multifaceted EP encompasses the moments of hope and acceptance in a nontraditional love where feelings are dynamic – temporary, lingering, abiding.  As someone who had been heartbroken so immensely, Molly didn’t know if she could love anyone again and was grieving the vision of what she thought her life was going to look like until she met someone that changed the idea of what she wants in a relationship.  Accepting the shortcomings and traits she’s run from for so long, she has now built a level of communication and trust in herself that she didn’t have before.  These tracks are Molly’s first singles since the release of her 2020 debut album Voice on the Internet which found her tapping into encapsulating thoughts and emotions as an ode to her journey of self-discovery.  The album spawned intoxicating post break-up banger “Handsomer” ft. Maty Noyes which Hollywood Life called “the empowerment anthem of 2020” and is currently featured in Amazon’s new film Jolt starring Kate Beckinsale, KROQ Locals Only favorite “Careful,” and “I love you but I don’t like you” which have been quickly adding to her over 17 million global streams.  As she continues to share her story honestly and openly through soulful beats and candy-coated vocals, Molly finds herself in a transformative state with Escapism, Part 1 as she dives off the deep end and embraces love in any way that it presents itself, loving herself and others in a much freer and kinder way.  Cover photo credit: Nas Bogado.

ABOUT MOLLY MOORE:
For as much as New York-born and Los Angeles-based songstress Molly Moore’s music speaks to a 5G generation, her straight-shooting lyrics, soulful timbre, and psychedelically spun style transcend eras. Throughout her career, Molly’s art impacted pop from behind-the-scenes writing for multiplatinum pop superstar Jesse McCartney, K-pop phenomenon EXO, as well as actress/singer Lea Michele, Swedish singer Robin Bengtsson, and has also composed children’s music for the Hasbro animated series Hanazuki. As an artist, Molly was previously one-half of pop duo Cosmos & Creature — who were signed to Steve Aoki’s Dim Mak label, garnered over 27 million streams, and shared the stage with artists such as Dua Lipa, John Mayer, and Bebe Rexha — before venturing off to create her solo music where she began to build a world around empowerment and expression. Molly has garnered praise from the likes ofPaper Magazine, Popdust, LA Weekly, Ladygunn,and PopCrushamong others, and her music can also be heard in a variety of commercials for brands such as Zales, Peloton, Toyota, and Jack in the Box along with syncs in Netflix’s The Last Summer, MTV’s Siesta Key, and ABC’s Conviction.
You can connect with Molly Moore via the following links:

ABOUT NoMBe:
Known for having a modern take on alternative music that is entirely his own, Noah McBeth — under the moniker NoMBe — initially garnered buzz in 2015 with his viral single, “California Girls,” paving the way for his 2018 critically acclaimed debut album They Might’ve Even Loved Me. The album featured single “Can’t Catch Me” (ft. New Mystics) which was personally chosen by Pharrell Williams as the official theme song to his HBO documentary series OUTPOST, while the track “Drama” (ft. Big Data) was featured in EA Sports’ FIFA World Cup 2019 soundtrack. Referred to as “one of pop’s most intriguing new faces” by Paper Magazine, NoMBe’s 2021 sophomore album CHROMATOPIA highlights the complexities of relationships on tracks like dreamy pop banger “This Is Not A Love Song,” indie-pop bop “Heels,” and breezy dance track “Paint California.” NoMBe has garnered over 380 million global streams with placements in a variety of television shows including Shameless, Ozark, The Resident, and more. He has also performed at Lollapalooza, Firefly Music Festival, SXSW, Outside Lands Music and Arts Festival, and Electric Forest, and received media praise from the likes of Elton John, Pharrell, NPR, Time Magazine, Billboard, Rolling Stone Australia, ET Canada, Entertainment Weekly, Grammy.com, Interview Magazine, Complex, Earmilk, and Flood Magazine among others.
You can connect with NoMBe via the following links:
Website | Facebook | Instagram | Twitter | Spotify | SoundCloud | iTunes/Apple Music | YouTube | Deezer | Bandcamp