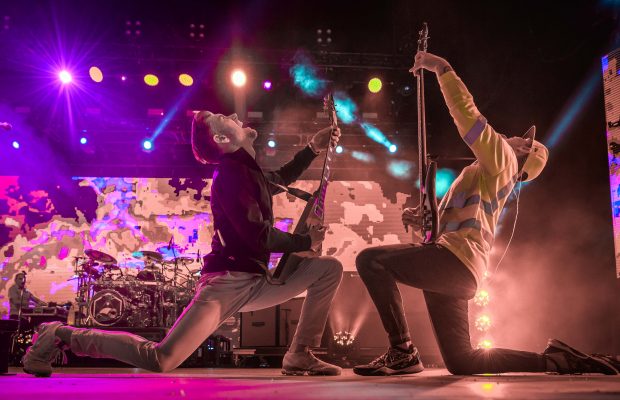 311 with The Dirty Heads

Words and Photos by Colton Marsala

On a hot day in August, USANA Amphitheater opened its doors for the last show in the 311 and Dirty Heads summer tour. Bikini Trill jump started the show with a surf pop, blending a variety of “electronic, hip-hop drums, skank island guitars, and powerful melodic vocals”. Following them up, DREAMERS, a trio formed in 2014, played an American pop rock set with pink hair and underwear. Salt Lake City grooved to the beat, waiting for the headliners to make their way on stage.

Dirty Heads kicked off their performance with “Burn Slow”, a mix of rap lyrics and lilting vocals. The crowd was primed for a great time. Getting started with a debut album in ‘08, the band has accumulated a massive fan base in Salt Lake City. Eleven years after their start, the Huntington Beach band was still seeing the same love. They closed with “Vacation” and everyone jammed to this upbeat celebration of enjoying life.

After Dirty Heads had left the stage, a countdown screen began ticking down the time until 311. When the clock hit zero, everyone paused in anticipation of the band coming on stage. With a glow of blue light, 311 opened with “Beautiful Disaster”, a twenty-two year old song that has become timelessly recognizable. Among the other songs played, “Amber” and “Come Original” were two more fan favorites with the crowd dancing and singing along. The final show of these two reggae rock favorites was a great way to finish their tour together and give Salt Lake City a memorable experience.