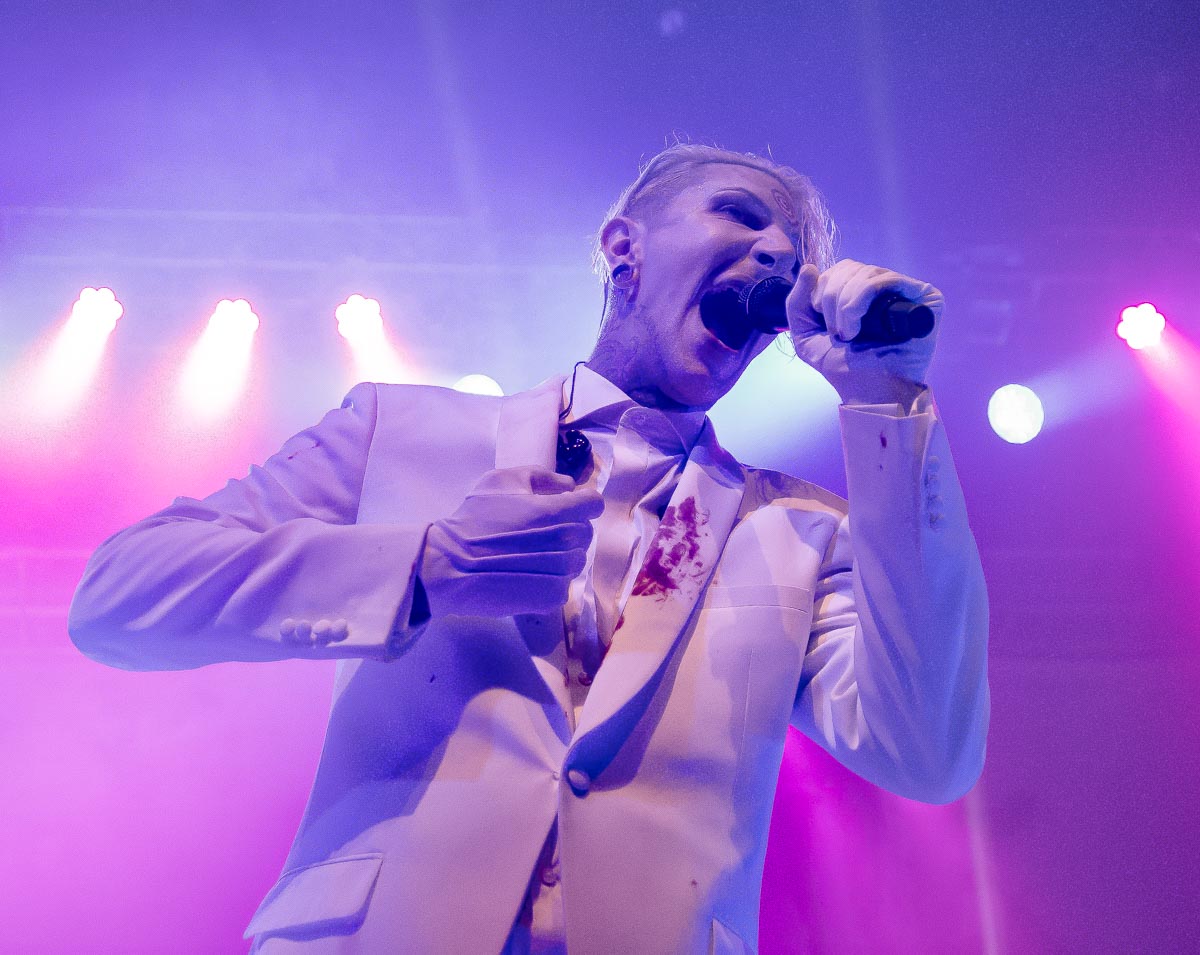 Motionless in White with Silent Planet and Dying Wish

On September the 8th, Motionless In White brought their current tour to Louisville, KY.  With many bands finally being able to tour this year, as shutdown restrictions have been eased in many states, they billed this as their return to touring.  The sold out crowd were lined up before doors opened up, as far as the eye could see, eager to see one of their favorite bands perform again.  As doors opened and fans rushed to the barricade, the venue filled up quickly.  Opening the show this evening was Dying Wish, a metalcore band hailing from Portland, OR.  With plenty of energy and singer Emma Boster’s screaming vocals, they had the crowd dancing and banging their heads in no time.  The band was in high spirits this evening, with Boster asking for a light to shine on the crowd at one point, telling them that this was the biggest crowd they had ever played to.  She said that the band had a new album coming out on October 1st, but that CDs were available to purchase at the merch table!  They definitely got the crowd warmed up for the night ahead!  Next up was California metalcore band Silent Planet.  Singer Garrett Russell was very active on the stage, moving about and interacting with the rest of the band and standing often at the front of the stage to interact directly with the crowd.  There were also times when he was on his knees on the stage, or lying down, singing with such emotion it was hard not to feel it.  With albums/songs that focus on heavy topics such as modern consumer despair and mental health, their songs have resonated deeply with many of their fans who have also gone through mental health struggles.  With plenty of fans in the crowd, dancing and singing along, the band performed songs from their extensive catalog, ending their short but high energy set with “Panic Room”, a song that Russell explained was about the PTSD a friend had developed upon returning home from war.

Headlining this evening was Pennsylvania heavy metal band Motionless In White.  As the lights went down, signaling they were about to take the stage, the crowd erupted into applause and cheers.  Clad in a white suit with white gloves, singer Chris “Motionless” Cerulli was all smiles as he walked out on stage to greet the crowd, with drummer Vinny Mauro standing behind his drum kit with his arms in the air!  Being their first tour in @ 2 years, it was apparent that the band was ready to rock, and rock they did!  Starting things off with “Thoughts and Prayers”, Cerulli, lead guitarist Ryan Sitkowski, rhythm guitarist/backing vocalist Ricky “Horror” Olson, and bassist/backing vocalist Justin Morrow took turns standing on the platforms that rested at the front of both sides of the stage, playing and singing directly to their fans.  With a sea of fans on the floor of the venue, from the front to the back, as well as upstairs in the balcony that flanked all sides, the energy from the crowd and the fans was electric, with both feeding off of the energy of the other.  Cerulli spoke a lot to the fans between songs, telling them that this was only their second club show in 2 years and that the band planned to play some new songs they had never played before, but before that would play some songs that the crowd knew very well and needed help singing them.  The crowd was more than happy to oblige.  About midway through the set, Cerulli asked the crowd “How many have been long time, diehard fans?  This song is not that old, but we do want to play some songs we haven’t played in a while or play all that often.”  In a playful mood, he went on to tell the fans who may not know the words to “just move your body, bang your heads, and pretend you know the words!  I’ve seen some of you do this already!  You don’t know what you’re singing and I don’t know what you’re singing, but you are moving your body and having a good time and that’s all that matters!”.  The band then launched into “Dark Passenger.”   For the next song, “Holding on To Smoke”, he joked that he was an old man because he had a lyric sheet on stage with him, saying he had forgotten the lyrics the previous night, pleased after performing song that he did not have to look at the lyric sheet this evening!

He then alerted the crowd that it was time for a new song, one that had seen an overwhelmingly positive reception, as well as time to pick the energy in the room back up!  Telling the crowd that wherever they were in the crowd, whether in the front, back, balcony, or to the side, the band wouldn’t judge them, but did require everyone to bang their heads!  The band then performed their brand new track “Timebomb”, with the energy of the crowd increasing and everyone going wild and singing along!  He then sat on one of the platforms on the stage, and in a serious note, genuinely thanked the crowd for their support.  Saying that the past year and half had been one of the most taxing experiences of the band’s lifetimes and probably for many others too.  That it had been mentally taxing, especially when there were glimmers of hope that shows would come back sooner, only to have Covid create more shutdowns and restrictions.  He went onto say that when he had thought about what shows would look like when they came back, this what what he had envisioned, and that the fans helped to support them through the pandemic by buying merch and supporting live stream events and gave a heartfelt thank you to everyone who had kept them going.  They then played another song they don’t play too often, “Hourglass”.  He then said “This is the moment of the tour I have been waiting for!  I have been waiting to sing this song in person since first performing it!”, with the band then launching into their spirited cover of The Killer’s “Somebody Told Me”, which had the crowd singing along!  Ending their set with a song dedicated to the band’s diehard fans, a song they never play live, the band performed “Creatures X: To The Grave” (live debut in front of a crowd)!  After briefly leaving the stage, the band came out for one more song!  Addressing the crowd one last time, Cerulli asked “Do you want to hear one more song this evening?  Thanks you for your continued support!  Next time we see you guys, we will have a new record for you!”, with the band ending the evening with “Brand New Numb” from their latest album Disguise.  It was a fun, high-energy evening of singing, dancing, and great music!  You can find remaining tour dates HERE.