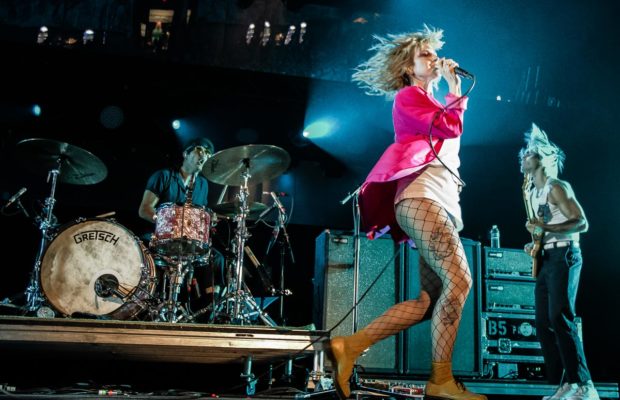 Nashville-based pop rock band Paramore played host to the Art + Friends mini-music Festival, designed to showcase the city they love, as well as some of their favorite Nashville bands.  Along with celebrating their hometown, the evening also served to shine a light on the alternative music and arts community within the city and to show people that there is more to Nashville than bachelorette parties and tourist bars.  The evening featured local food vendors, community organizations and artists, as well as local vendors that included Grimey’s Records and William’s hair color line goodDYEyoung, allowing the fans to experience the Nashville art and music community the way the members of Paramore do.  The festival also marked the end of the tour they started last May in support of their 2017 album After Laughter, with this being their last show for a while as they close this chapter of the band.

Although doors for the event opened at 3:30, fans were lined up well before then.  Wearing colorful, glittery eye make up and clothing, the fans were ready to celebrate and have fun with their favorite band.  As the doors opened and the fans filed into the auditorium, there was a mad dash to the barricade to secure their spot for the show.  Many of the fans had posters to hold up when Paramore took the stage, telling the band how much they love them or displaying a song request.  Starting things off was Nightingail.  Singer Alicia Gail captivated the audience with her beautiful, soulful voice.  Performing an array of soulful, bluesy and folk inspired songs, I have no doubt they made some new fans this evening!  Next up was Liza Anne.  As the band walked onto the stage, there was a neon “Fine But Dying” sign on the right side of the stage, named for the band’s latest album.  With a fitted light pink suit with red fringe hanging from the back of the coat, a red beret and her hair in two long braids, and the band clad in maroon jumpsuits, the indie rock singer treated the crowd to several songs from the album.  They got plenty of cheers from the crowd throughout the set.  At one point, Liza Anne tells the crowd that being in a band is a crazy job for her to have due to her panic disorder and commends anyone in the crowd who has the same disorder and was able to come out this evening.  Next up was the indie electronic band Canon Blue.  The band eased into their set with some of their more mellow tracks, but as the set progressed, the band increased their energy on stage and got the crowd dancing!  The band ended their set with the song “Chicago”, which saw frontman Daniel James bring his longtime friend, and Paramore guitarist, Taylor James to stage to close out their set.  Bully was up next and really got the crowd going with their fun and aggressive punk rock tunes.  Singer Alicia Bognanno’s voice was made to sing this style of music and can, in my opinion, be classified as one of the great punk rock singers of this era.  Beams of red, blue and white light that shone down from above, as well as plenty of fog, lent a great ambiance to their set, as did the ice cream cone light that sat atop the bass amp!  Next up was the popular electronic band Coin.  Having developed an ever-growing fan base over the years, singer Chase Lawrence had the crowd dancing in no time.  Coin is an incredibly fun and upbeat band, with Lawrence’s energetic stage presence a staple of the band.  When the band played their 2016 hit “Talk Too Much” towards the end of the set, the crowd erupted into cheers, with the sounds of the entire crowd singing along echoing throughout the auditorium!

Headlining the show was the band that everyone was there to see-Paramore!  As I wait in the photo pit for the band to take the stage, I asked one of the girls at the barricade what time she got in line to get her spot up front.  She got there at 9:30, which is a testament to the dedication of the fans and the love they have for Paramore.  As the band took the stage, singer Hayley Williams was a bundle of energy.  Being the last show the band will play for a while and a close to the After Laughter chapter of the band, everyone was in high spirits and ready to have a good time.  Starting things off with the song “Grudges”, Williams danced across the entire stage, twirling around and doing plenty of leg kicks and hair flips.  Four songs into the set saw the band singing their classic hit “That’s What You Get”, with the entire crowd cheering, dancing and singing along.  Williams then addressed the crowd, saying hello and mentioning how great it was to be home.  She talked about how special the evening was, as the band was saying goodbye to their favorite album they’ve released as a band, then thanking everyone for being there and telling the crowd how much she loved them.  Almost halfway through the performance, the band left the stage briefly as chairs for the band were set up at the front of the stage, with a few additional chairs being set up next to them.  The band then came back out, sitting in the chairs at the front of the stage, while a string section (that had been arranged by Dan in Canon Blue)  sat in the additional chairs.  Williams started out by thanking the crowd once again for being there and saying how proud the band was of this event and of showing off their city.  She then said that they were going to play some stripped down songs with electronic elements.  Since they started their previous album cycle listening to Drake, they started out playing a cover of Drake’s “Passionfruit” and the crowd sang along.  Williams then told the audience how she first played in this room in 2010 when the band was touring on their third album, saying that while not the most peaceful time for the band, it was a special time in which they all learned things they didn’t know they were learning at the time.  Williams then introduced the band, saying it was a really great year for the band and the crew, that they felt good in their hearts celebrating like this but sad because it’s their last show together for a while. The band briefly left the stage once again as the chairs were removed and the stage was put back to it’s original set up.

As the band came back out, Williams told the crowd how Paramore had been a band since 2003 and are still doing this in 2018, never imagining the band would be around for so long.  She mentioned how incredible and humbling it felt to still be here as a band in 2018, thanking the crowd for following them on their journey.  Williams then told the crowd how when she was still in high school in 2006, the band was writing their second record RIOT!.  She was having boy problems and wrote a song called “Misery Business”.  While the song was a huge breakout hit for the band, she said that she probably wouldn’t use the same language now and that calling someone a whore isn’t very cool.  Before launching into the song, she told the crowd that this was the last time the band would play “Misery Business” live, that it was time to retire the song and move away from it and give it a proper send off!  She then told the crowd to raise their imaginary glasses for a toast “to every bad decision that brought us here, to all of the dumb things we’ve said, to Zac re-joining the band and to Taylor for keeping the band alive”.  As the band started the song, the crowd went wild!  The auditorium transformed into a giant party, especially when, halfway through the song, Williams stopped singing to choose three fans from the crowd to bring up on stage.  You could see the sheer joy mixed with utter disbelief of their faces as they walked on stage, giddy with excitement as Williams gave them each a hug and their own microphones.  Telling them the stage was all theirs, the three fans sang the remainder of the song at the top of their lungs and danced their hearts out.  It was a beautiful sight to see and a powerful reminder of how much Paramore loves their fans.  The band then launched into “Ain’t It Fun?”, asking the crowd if they had anymore dance moves left.  For their final song of the evening, they sang “Tell Me How’, the last track on After Laughter and the first time the band had ever played the song live.  As they ended the song, Williams told the crowd that Nashville has always been home Paramore and they have been grateful for the opportunity to really explore their community.  They created a really special night for their fans and for the Nashville arts community.  I look forward to seeing what they do next!