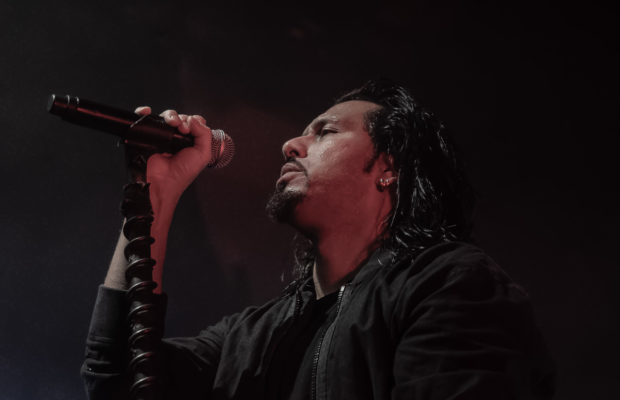 Pop Evil with Them Evils

Michigan Rock band Pop Evil is always a fan favorite when they come through Louisville, KY, and this Sunday night was no different.  Although cold and rainy, the band’s fans came out in droves and packed the venue, buzzing with energy for the night ahead.  With a nearly sold-out crowd, it was apparent from the start that this was going to be a great night!  Starting things off was LA Rock and Roll band Them Evils.  Having formed in 2013, they have been touring relentlessly for the past few years and building an ever-growing fan base along the way.  Playing good, old-fashioned rock and roll, the band got things started on a high-energy note, pouring their energy out on stage for the crowd to soak up!  The band came onto the stage and gave each other fist bumps and high-fives before starting, making it clear that they are the best of friends both on and off stage.  As the band started their set, singer/guitarist Jordan Griffin announced that it was bass player Jake Massanari’s birthday and that the crowd should buy him shots after their set and get him wasted, which elicited plenty of cheers from the crowd!  Massanari then told the crowd “Of all the places I could be on my birthday, this is cool!  All I want for my birthday is for you to all rock out!”, to which the crowd happily obliged.  They then announced “We’re Them Evils from Southern California and we’re gonna play you some rock and roll”, performing hits such as “Got Me Rockin'”, “She Got Nothin””, “Have One On Me” and a fun cover of AC/DC’s “Dirty Deeds”.  The crowd was having a great time dancing along, with those fans familiar with the band already singing their hearts out along with Griffin.  Griffin and Massanari came to the edge of the stage throughout the set to interact with the crowd, and on a few occasions, they both got down onto the barricade to play and sing directly to the crowd!  At one point, Massanari got down into the crowd and made his way up to the balcony, where he played a bit of bass for the crowd upstairs before heading back down to the stage!  They are a true live band who give it all they have on stage and gave the crowd an incredible start to the evening!

During the few moments that it took for Them Evils to break down their set and for Pop Evil’s equipment to be set up, comedian Don Jamieson came out for a quick comedy routine. A stand-up comedian, presenter at MTV Classic and Metal Blade Records recording artist, Jamison kept the crowd entertained with a bit of comedy, covering topics such as Caitlyn Jenner, Guns n’ Roses and several other topics that had the crowd laughing.  As the house lights dimmed, it was clear by the cheering and screaming that Pop Evil was about to hit the stage!  As the lights came on, prominently situated behind the stage was a huge banner that said Pop Evil and had the cover artwork from their latest album.  The band came onto the stage, one by one, with singer Leigh Kakaty being the last to come out.  Asking if there are any old school fans in the audience, they immediately launched into their 2011 hit “Bosses Daughter” followed by newer songs “Colors” and “Ex Machina”.  The band has a deep connection with and appreciation for their fans that was very apparent this evening, with Kakaty holding a hand to his heart and joining his hands throughout the set as if in prayer, giving a slight bow towards the audience.  Singing plenty of other hits this evening, including “Be Legendary”, “Footsteps”, “Rewind” and “Torn To Pieces”, they had the crowd singing and dancing all night long.  Although he was fighting illness this evening, Kakaty told the crowd that the band never cancels shows.  He told the crowd “Every time we do a tour, we check to see if Mercury Ballroom is a stop on the tour.  We’ve been looking forward to this show and although I am feeling bad, I’m prepared to rock it!  Even if I lose my voice I’ll give it my all, so if I’m not slacking, neither can you!”.  Judging by the crowd’s reaction, they had no intention of slacking! He then said that a kid had come up to him recently and said that his mom told him that Pop Evil used to play covers and asked why the band doesn’t anymore?  He told the crowd that maybe the band should start having more fun with their fans!  Having performed covers of Drowning Pool’s “Bodies” and Survivor’s “Eye Of The Tiger”, the band then launched into a cover of Live’s “I Alone”, which really got the crowd going!  Ending their set with “Take It All”, the band briefly left the stage before coming back out for an encore.  Kakaty started the encore by telling the crowd that Pop Evil has the best fans.  He then said he hadn’t lost his voice yet and had been too looking forward to this show and was going to sing 3 more songs, asking the crowd if the band should take it up a notch?  They then played their oldest song from way back, “100 In A 55”, asking the crowd to put their cellphone lights in the air.  They then performed “Waking Lions”, and ended the evening with their hit song “Trenches” for which they brought the guys from Them Evils out on stage with them!  The stage was pure energy and everyone, the bands and the crowd, had a great time.  Kakaty’s shirt had the words Be Legendary on it, and it is clear with each time that I see Pop Evil play that they aim to achieve that goal.  They pour their heart and soul into each performance and create a memorable experience for their fans!