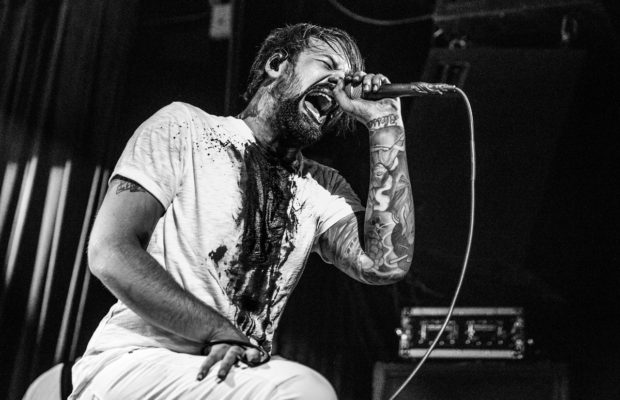 Old Wounds
Fit For A King
Every Time I Die
Beartooth

Manhattan streets were packed with festive Halloween Parade attendees, but the real party was inside New York’s Irving Plaza where Beartooth was bringing their Aggressive Tour. Old Wounds, Fit For A King, Every Time I Die and Beartooth all graced the stage in full Halloween tradition and threw one of the craziest Halloween parties I’ve experienced.

Fresh off a full summer on the Vans Warped Tour and definitely one of the buzz bands of the tour, New Jersey’s Old Wounds opened the set. Entering the stage to spooky symphony music, all seemed well and good until lead singer Kevin roared into the microphone and let everyone know what they were about. The band played a speedy opening set full of energy to get the crowd pumping. They closed out their set with their notable song “Rest In Piss”.

Texas-based metalcore band Fit For A King were due up next. Guitarist Bobby Lynge dressed as Captain Mosh for the evening, whose duties included getting the pit rowdy and welcoming the crowd surfers to the stage. The band filled their short but sweet set time with songs off their most recent release Deathgrip including “Shadows & Echoes” and “Pissed Off”.

The real party began to pick up when Every Time I Die’s set began. Rocking a mullet, guitarist Jordan Buckley led the band onto the stage, donned in full dad gear with a cigarette hanging out of his mouth. Amidst the finest polos, cargo shorts, knee braces and tennis shoes, the hardcore band played a raging setlist and for a moment had me confused as to whether fans were there for Every Time I Die or Beartooth! A large circle pit opened towards the back of the venue where moshers in costume partied hard. The band played a nearly hour long setlist that included songs like “Underwater Bimbos from Outer Space” and “The Coin Has A Say”.

After a wild set from Every Time I Die, many attendees left the venue and I grew worried that Beartooth wouldn’t have the showing that we all expected. As the lights dimmed and the spooky Halloween music began playing, it was clear that I was wrong. Fans along the barricade were screaming their lungs out, the pit was rearing to go and it was clear that everyone was ready for Beartooth. The band graced in the stage in matching white outfits with blood dripping from their mouths and down their shirts. Not even 30 seconds into the opening song “Burnout”, crowd surfers were being lifted from the crowd every which way! Beartooth’s set was wild from start to finish and they truly proved they know how to put on a good show. Their extensive setlist featured hits new and old including, “Hated”, “Beaten In Lips” and, my personal favorite, “In Between”. After waiting for years to finally see Beartooth and to understand the true hype of the band, I can honestly say that everything you hear is true and Beartooth is a must see band! The metalcore band puts on a lively and thrilling show chock full with crowd surfing and impeccable performances from each band member.