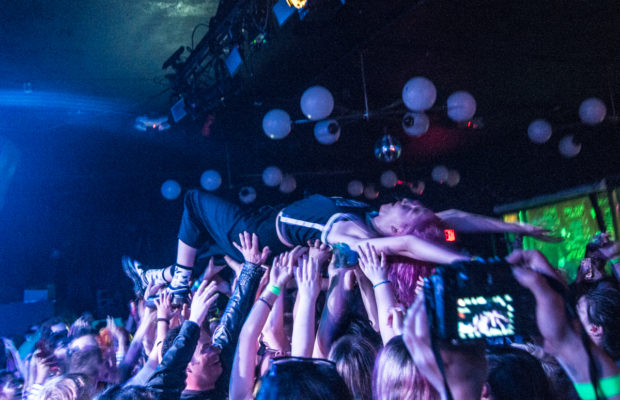 The Regrettes with Destroy Boys

Starting the night off was Destroy Boys, a West Coast punk band hailing from Sacramento, CA that was formed in 2015 and is carrying on the riot girl legacy. With Alexia Rodtis on lead vocals and Vi Mayugba on guitar and vocals supply haunting melodies and guitar shredding, paying homage to all things that are classically punk. Their latest EP Crybaby/Vixen is out now on Uncool Records. Be sure to give a listen to their latest single “American River” up on Spotify.

Next up was headlining act, The Regrettes, who had just come off of playing a set at Governor’s Ball NYC that same weekend. The audience was filled with fans who wanted to get a glimpse of them once more before they left the NYC area.

Founded in 2016 out in California they are definitely on the rise to take over the indie garage rock scene with their ferocity and penchant for hooks that get the entire crowd going. With Lydia Night on lead vocals and guitar, Sage Chavis on bass, and Genessa Gariano on guitar they played songs off of their album Feel Your Feelings Fool! including “I Don’t Like You,” “Seashore,” “A Living Human Girl,” and “Hey Now.” They also played “Come Through” and “Red Light” off of Attention Seeker.

Be sure to check them out this summer as they tour across the U.S. They will also be playing at the Reading Festival in the UK and Bumbershoot out in Seattle, WA in August.