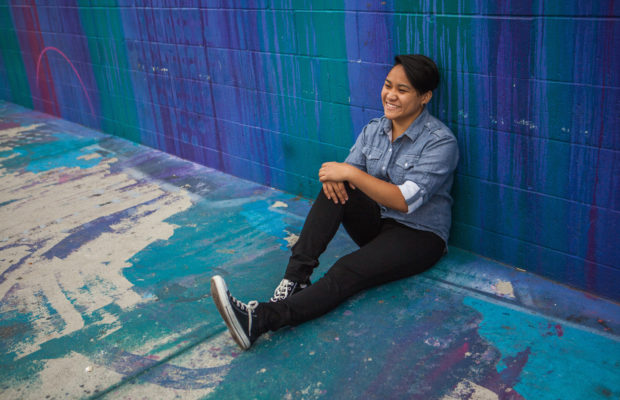 After realizing her passion for photography back in middle school, Los Angeles-based photographer Angelica Nicolle Abalos has been in and out of photo pits ever since, photographing acts such as Fall Out Boy, A Day To Remember, and Blink-182. With work published in a number of publications including Acentric Magazine, Cherry Pit Mag, and Rumored Nights Press, Angelica recently caught up with editor Rachael Dowd to chat about her favorite moments over the years and what every aspiring photographer should know before heading into the pit.

My interest in photography started in middle school. I mostly took photos with a point-and-shoot digital camera, various camera phones, and disposable cameras. Those were the days when I took pictures of anything and everything, simply pressing the shutter button when I thought something looked cool. It was after high school–with my film SLR–and during my college years–when I finally got a DSLR–that I decided to take photography seriously. I spent a lot of my early college years doing portrait shoots thinking that was the career path I wanted to pursue.

A Day To Remember

I like to think I had two “first shows.” The first time I photographed an actual concert was when Relient K played at my university in 2012. I lucked out and was able to bring in my Canon T2i. My friend pulled me through the crowd and we ended up front and center at the barricade where I snapped hundreds of photos that night. I was thrilled to have been able to capture the event being so close to the bands. From there, I continued to shoot local shows whenever I got the chance.

My first ever photo pass was two years later in 2014 for Switchfoot’s Fading West Tour. At the time, I was working for my school’s newspaper. My photo editor was writing an article on the band that week and mentioned he was just approved for a photo pass to shoot their show. I figured I’d try my luck at getting a pass for myself, so I emailed the venue saying I was shooting for the school’s newspaper and was approved as well. That was my first time shooting in the pit. I was hooked.*

The only thing I would change, if any, would be my skill set in photography. There were a lot of blurry images, poorly composed shots, and many missed moments because I only shot with my camera on auto. I didn’t fully know how to work my camera or how to edit photos at the time, but hey, everyone starts somewhere, right?

(*Note: I had no idea how requesting passes, or the industry in general, worked back then. Don’t request shows just to get in for free and if you’re not really on assignment. That’s a really HORRIBLE thing to do and will get you into some trouble if you get caught.)

If I had to give a word, I’d say my style is “eclectic” because it is always changing as I learn and try new things. Being a designer first, I do tend to lean towards uncluttered and often centered or symmetrical compositions. When I shoot, I place a lot of emphasis on expressions and gestures/body language. But my editing style varies as it changes based on my mood and what emotion or vibe I want my images to evoke.

I could take a thousand photos I’m proud of, but I’ll always hold a special spot in my heart for this silhouetted photo I took during the Switchfoot show.

After we were booted out of the photo pit, I wandered around the venue to take photos of the rest of the set. I’d gotten in trouble by a couple people working security for walking around and standing where I shouldn’t have been, so I found a spot in the bleachers and shot from there for the rest of the night. Honestly, this was a right place, right time kind of shot that I lucked out on. Producing that shot made me realize I wanted to pursue music photography.

Hands down, my favorite genre to shoot is rock. Be it alternative, pop-punk, or rock ‘n’ roll, I definitely feed off of the atmosphere during those shows. The energy that bounces back and forth between the crowd and the performers is unmatched with everyone singing along and having the time of their life. More often than not, even if I don’t know the artist I’m shooting, I almost always come out of that show a new fan. I’m never disappointed after shooting a rock show.

Along with photography, you also are involved in the design and fine arts world. Is there a medium of art that you prefer working in over the other? Why?

Design is often calculated and structured. I usually have a plan drawn up that needs to be executed, problems that need to be solved, and rules that need to be followed to a T. On the other hand, live music photography is fluid and candid. I have no idea what to expect. I have to always be on my toes–sometimes literally depending on the stage height–to anticipate my next shot, but I can still have fun in that moment. Fine arts, in my opinion, can be a wonderful mixture of both those things. In the fine arts spectrum, I tend to be drawn to sculpture based projects because I love working with tangible objects. Being able to use my hands to construct a piece is so satisfying when you’re used to clicking buttons for hours on end. All that to say each medium I work in engages a different part of me, so I honestly love them the same.

With quality cameras being so easily accessible nowadays, the amount of photographers that are popping up lately is pretty insane. Additionally, there are clear style trends in music photography right now that are very popular in the community. It’s tempting to want to shoot or edit my photos a certain way when I know that’s what people are currently drawn to. It all comes down to staying true to myself and focusing on my vision. I don’t really need to go above and beyond to try and stand out because in the end, my talent and work will speak for themselves.

As a photographer who is very active on social media, what importance do you feel social media websites such as Twitter, Facebook and Instagram hold in your career and the career of photographers around the world?

In this day and age, social media plays a huge role in creative careers. It’s a tool that everyone should be using because it is so easily accessible. It’s crazy to not take advantage of all these platforms that showcase your work in front of hundreds and thousands of people. Even aside from using these sites as an extension to your portfolio, social media does an amazing job in connecting you with others in your field. For creatives, and anyone in general, networking is such an important part of career building. The fact that you can achieve so much and have all of these benefits at your fingertips is something we often take for granted, but should really be taking more seriously.

A Day To Remember

Be dynamic and never stop learning. These two go hand in hand. Learn about yourself as much as you learn about all the functions and settings on your camera. Don’t be stagnant as an artist, but instead stretch yourself by shooting various subjects with various mediums. Try new things and teach yourself new tricks. Having an insatiable hunger for knowledge and growth will do wonders for you and your career. You can never go wrong with self-improvement.

Portrait of Angelica by Melanie Kim