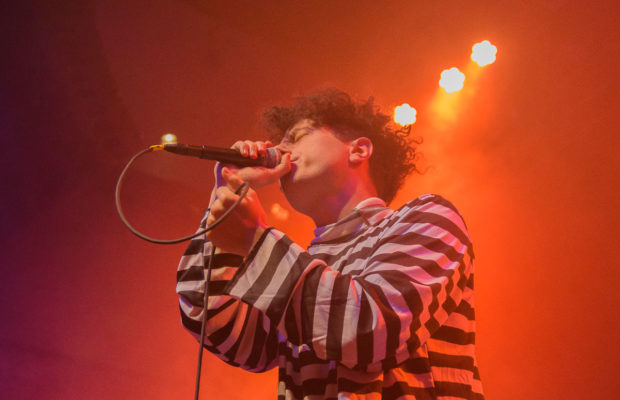 Nashville-based synth-pop band Nightly have been steadily been making waves on the charts, having released videos this year for their hits songs “XO” and “Talk To Me.”  They released their debut EP Honest last year and have since performed with such musicians as Gabrielle Aplin, K Flay, Ke$ha, The All-American Rejects and Zella Day.  Currently on tour with The Struts, they are continuing to wow audiences nationwide and grow their fan base. We sat down with Jonathan and Joey before their Halloween show in Louisville, KY to discuss how the past year has been, the filming and ideas behind their music videos and their plans for the future.

Stitched Sound: It’s been about a year since your EP came out.  How has the past year been for you?  What are some of the highlights and surprises?

Jonathan: Wow!  Yes, a lot has happened.  Highlights are some of the headlining shows we have done, like Nashville and Columbus, Ohio.  I mean, Nashville makes sense because that’s where we are from, but when people from other cities that we’ve never been to come out..that’s happened a couple of times in the past year…that’s probably been the biggest surprise/highlight so far.

SS: I read that one of your biggest challenges as a band has been to grow your EP while still keeping those who have been with you since the beginning engaged?  How have you been able to find that balance?

Jonathan:  We’ve put out a couple of videos, and kind-of spaced them out.  When we play live, we’ve been trying out different new songs on each tour.  I think…not for every tour but most tours…we’ve, like, added another new song.  That way the people who come and see us have a little taste of something new.  It is hard, though, without releasing new stuff.

SS: What was the filming process like for your videos?  Do you enjoy making them?

Joey:  It’s just part of things.  I mean, we have a vision for everything that we want, an aesthetic that makes sense everywhere.  The actual shooting of the music video is usually pretty grueling.  It’s usually like a 12 hour shoot overnight.  But it’s worth it.  I think it makes sense in the Nightly universe.  I think it’s an important part to keep people interested.

SS: Was the vision for the videos completely yours or was it a collaborative effort with others?

Jonathan: Everything you see is us.  I mean, videos are a collaboration with a director and we had the same director do both videos.  We chose him based on what we wanted and he wrote, like, the treatments for the videos based on an hour-long conversation we had with him of what we were looking for and stuff.  We collaborated in that way for sure, but I think it definitely started with us.  You’ll see people who pitch videos and stuff and you’ll read the treatments and they’re all, like, super generic.  It definitely came from us choosing to work with a guy named Tobias.

Jonathan:  Yeah, exactly!  I just think he uses color in a way that is very unique, that makes you feel a certain way.  I had seen this video that he had done for an artist named Miguel, and I was just, like, inspired by the video.  So when we were talking about which director to choose, I was using his video as a reference and was like “let’s just reach out to him and see if he’d be down”.  It’s hard to explain, I guess, until you’ve, like, watched one of his videos, but it’s kind-of, I don’t know…dramatic and romanticized, specifically with his use of light and color.  It just felt similar to all of our other stuff, like Joey was saying, with the EP and pictures and instagram and all of that.  It seemed like it made sense so we’re happy with it.

SS: You guys are currently on tour with The Struts!  How did that tour come about?  How have the shows been and what have been some of your favorite moments from the tour?

Jonathan:  Yeah!  We were lucky enough to do a couple of shows with them earlier this year, around April or May, I think, and they were awesome!  You know, sonically, it’s not something you would maybe expect, but we really just clicked with them.  They’re just a class act.  Every show has been great and their audience has been really receptive, as well, which was something we were a little concerned with.  And then these shows just kind-of popped up as an opportunity and we were like “yeah, we’d love to do it again”, because the last shows were so great.  They’re super sweet guys and fun to watch every night.  They put on a really fun show.

SS: Yeah, I saw them the last time played here and they put on a great show!  Luke had on make up and a gold sequined jacket and they were just super fun!

Yeah, he’s so sick.  That’s the thing, too…not many people are putting on that kind of show anymore. It’s fun to see.

SS: You guys have such a great connection with your fans.  Have you had any particularly memorable moments or interactions with your fans?

Jonathan:  Yeah, lots.  It’s cool because we’re still a small band so we’ve gotten to know some of them.  We’ve had fans get tattoos and….

SS: I read that you had some fans in NY bring you roses!

Jonathan:  Yeah, we’ve had it happen a few times, in different cities…NY, Austin and Boston.  It was super cool.  Those are probably some of the biggest ones that we’ve seen in person.  We’ve seen things online, you know, like fans will draw us and make interesting art and stuff which is cool too.  One time these girls made us a bucket of oragami which was cool too.  I think it was, like, a good luck charm.

Joey:  We’ve got them in the van still.  I think there’s like 50 of them!  It must have taken them forever.

Jonathan:  You just never know.  One time this girl did this, like, weird voodoo bracelet thing where she like transferred her bracelet to me.  It didn’t really work though because it was for a specific show and the show went bad, so maybe it was bad…I don’t know.  I think she meant well with it.

SS: I read where you guys talked about just loving everything about Nightly so far, whether it be recording, writing, playing or touring.  How do you keep that passion and love for what you do alive?

Joey:  I mean, we’re pretty terrible at everything else, ya know (laughs)?  We’ve been doing this for 13 or 14 years now, and honestly it’s just what we love to do.  Generally we don’t do any one thing for a super long time.  If we’re on tour, we’ll tour for three months straight and then have 3 weeks off, so then we’ll be writing and when we’re done writing we’re ready to go back on tour.  It’s a nice balance.

Jonathan:   We’ve been writing and recording a ton.  I don’t know what we’re going to do next.  We may put out a couple of EP’s instead of a full length-I just don’t know.  We’re probably not going to put out a full-length next because we want to grow our audience more and all that.  We’re finished with a bunch of new songs so we’re just trying to figure out how we want to put them out right now.

SS: Do you guys record in Nashville, or LA?

Jonathan:  LA and Nashville.  We write a lot on the road but I think most of the songs we’ve recorded have been in Nashville or LA.

SS: What are you guys listening to right now?  Is there anyone you think people should be listening to?  Any newer artists?

Joey:  I mean, I still listen to Arizona all of the time.  I think that they are super talented dudes and that their songwriting is amazing.  There are so many good songs on their last album.  That’s probably what I’ve been listening to the most lately.

Jonathan:  I like Arizona, as well, and Frank Ocean. I like The Neighborhood a lot.  They just put out a new EP.  That’s probably it, I think.  There’s this girl, a friend of ours, she just put out her first song.  Her name is XO Rio.  She’s got a song that’s really cool.  I think the song is called “Head Held High”.  Yeah, she’s super cool.

SS: So what’s next for you guys?

Jonathan:  We do these shows with The Struts, and then our last show with them is Sunday (11/5) , and then Monday morning we fly out to LA.  We’ll be in LA until Thanksgiving doing some more writing and recording.  Yeah, that’s pretty much it for now.  Everything we will be doing for the rest of this year will be to get ready for the new release.  We’re excited!

Interview and Photo by Emily May

You can keep up with all the upcoming news at nightlovesyou.com.