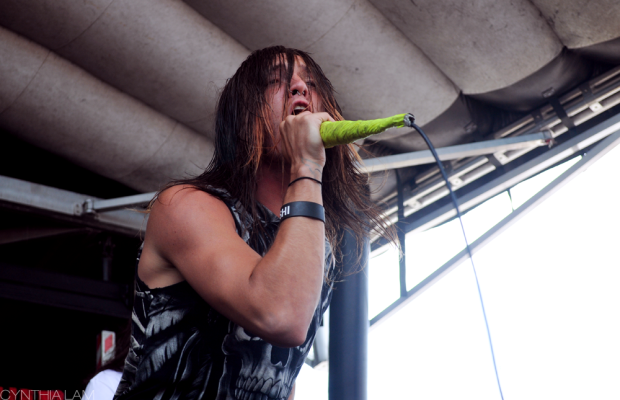 Spending the second half of their summer on Warped Tour, The Word Alive have built up quite a name for themselves. In the past year they have embarked on several tours throughout the United States. Soon after they headed into the studio with Andrew Wade to record a new album. The Word Alive will be releasing their debut full – length Deceiver on August 31st, 2010.

The Word Alive just finished Warped Tour. Would you say this has helped the band grow?
Of course, Warped Tour in a big way is all about exposure. Somedays are brutal with the heat, but you’re gonna play for so many new faces you just have to do your best. We went on-stage everyday with the mindset that nobody had ever seen us before and I think it payed off.

Have you ever had any near-death experiences while touring?
We actually have had three! Once our last TM fell asleep while going 70mph on the highway, we hit a guardrail. That saved our lives. The second was our bus on Warped almost drove off the cliff at the Gorge in Washington, if you’ve ever been there it’s like the mini-grand canyon! Scary! The third one was our first tour, and we hit a 450lb buck outside of San Antonio. It destroyed our van and we were all shaken up, but we’ve been fortunate enough to never come out hurt.

Which song off Deceiver would you say is the most meaningful to you?
Like Father Like Son, because it speaks about a lot of personal feelings and experiences I went through with my father.

Did you encounter any new challenges while writing and recording Deceiver as opposed to Empire?
We just wanted to push ourselves, so anytime we felt a section or part wasn’t good enough, we’d challenge ourselves to make it better. We did that with the entire record and I’m very proud of it all.

Is there anything on the album that fans might not expect?
We have a couple curveballs, for instance we wrote an all singing song “You’re All I See” and threw in some awesome electronic components and dub-step into a breakdown. I think they are all “us” though and hopefully kids like the new twists!

If you could turn back time and give yourself one piece of advice before stepping foot into the music industry what would it be and why?
Ask more questions. Early on we trusted too much, and that is a big mistake which we’re paying for financially now. But you live and learn, and we’re blessed with a great label and team behind us that now is getting us back on track!

What were your first impressions of the other members in The Word Alive?
I thought that I was gonna have the most fun I’d ever had while touring, and I’ve been right. We are the goofiest bunch of guys and we all fit really well. I like that we can all be ourselves and comfortable.

How important is it to you to keep in touch with fans? Why?
Extremely important, any fan of myself from previous bands or of TWA knows that we pride ourselves in continuing to control all of our pages and try to respond to as many people as possible, and to never turn down the opportunity to talk with a fan at a show. We aren’t the guys begging to not sign any more autographs, we want to hang out with our fans at shows.

What would you say The Word Alive is about? Is there any messages that you are trying to send through music?
We’re about strength, and honesty I believe. We talk a lot in our songs about overcoming things, people, and other obstacles in ones life. We’re very open about believing in yourself and trusting your gut instincts. We just want everyone to know that we live in a free world where anything is possible.

Where do you see yourself in a year from now?
Hopefully talking to you about the writing process of our next album, talking about big tours, and about the future of TWA looking as bright as ever 🙂