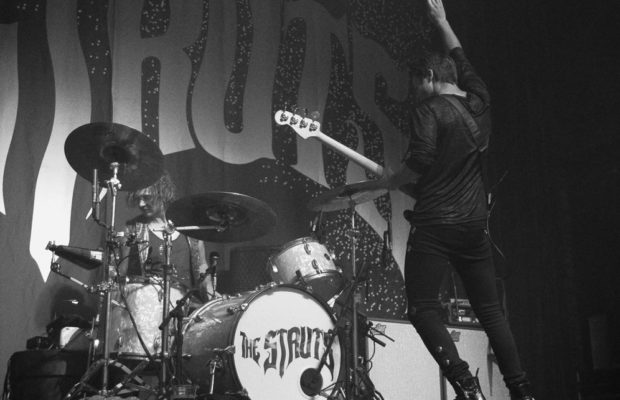 The Struts with Nightly

British glam-rock band The Struts, currently on tour in the US, performed a Halloween show in Louisville, Ky recently.  With many of the fans dressed in costume, the mood was festive and the crowd was ready to have a good time.

Opening the show was Nashville synth-pop band Nightly, whose fun and energetic set got the crowd warmed up and ready for The Struts.  Their set included their hit songs “XO” and “Talk To Me”, as well as a couple of new songs. Dressed in black and white striped shirts and pants, designed to look like inmate uniforms, the band performed an upbeat set that got the crowd dancing.

The crowd was eager for The Struts to come on stage, wildly cheering and clapping as the lights dimmed, signaling that they were about to come out.  The Struts are the epitome of glam-rock, with singer Luke Spiller coming out on stage with full make up, a matching gold and black pair of pants and jacket, both of which had plenty of fringe, and a gold sequined shirt.  The band puts on an incredibly fun show, with plenty of interaction between band mates and with the crowd.  Spiller is a dynamic frontman, constantly moving around the stage and energizing the crowd. Performing a setlist that included their hits “Kiss This” and “Could Have Been Me”, the band had the crowd singing and dancing all night.

About halfway through the set, while between songs, Spiller talked about how they had never gained the popularity in England that they had in the US and that they were grateful to the US audiences for their support.  He then asked that the house lights be turned on so that he could see what people had dressed up as, calling out a couple of guys dressed as Gene Simmons and Paul Stanley and a girl dressed as a sexy unicorn.  Towards the end of their set, as they came out for their encore, Spiller had changed into a different gold sequined top and a silver sequined top hat with a shiny red sash tied around it.  The band all gathered together after the last song ended and took a bow for the audience.

The Struts put on an incredibly fun show and gave the audience a memorable Halloween night!

Put Your Hands Up

Put Your Money On Me

Could Have Been Me

Where Did She Go?