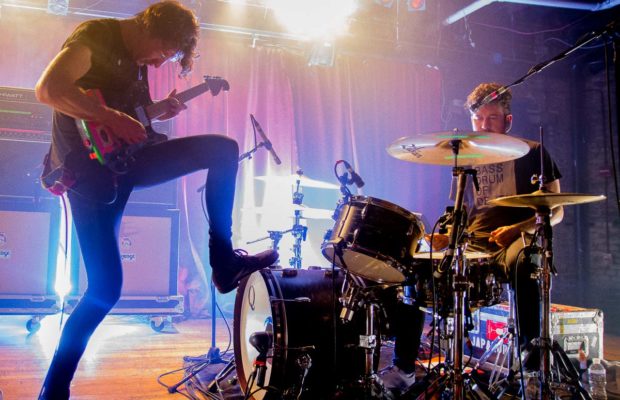 Canadian indie rock band Japandroids are currently on tour in support of their latest album Near To The Wild Heart Of Life.  Performing to a packed house in Nashville recently, the band performed a nice mix of older and newer songs for the crowd.  Having formed in 2006, singer/guitarist Brian King and drummer/vocalist David Prowse have amassed quite a passionate fan base.  The crowd was restless awaiting the band to take the stage, and as the lights dimmed to signal the band’s entrance the crowd cheered and applauded loudly.  Starting the set with a new song, Near To The Wild Heart Of Life, the band kept the crowd singing and dancing all night.  Japandroids is a very anthemic band, making it impossible not to sing along!  King chatted a bit with the crowd between songs, telling the crowd before launching into their song North East South West that they’d never had the chance to sing that song, which mentions Tennessee, in Tennessee before.  Throughout their set, the band had soft and often multicolored lighting, with bright bursts of light appearing sporadically.  Although it’s just the two of them, King and Prowse put on an incredibly fun and energetic show and their passion for performing shines through.  They ended the set with their hit The House That Heaven Built, which had the entire crowd singing along.  King and Prowse gave their fans an amazing show and left the crowd buzzing long after they left the stage!

Near to the Wild Heart of Life

The Nights of Wine and Roses

No Known Drink or Drug

The House That Heaven Built