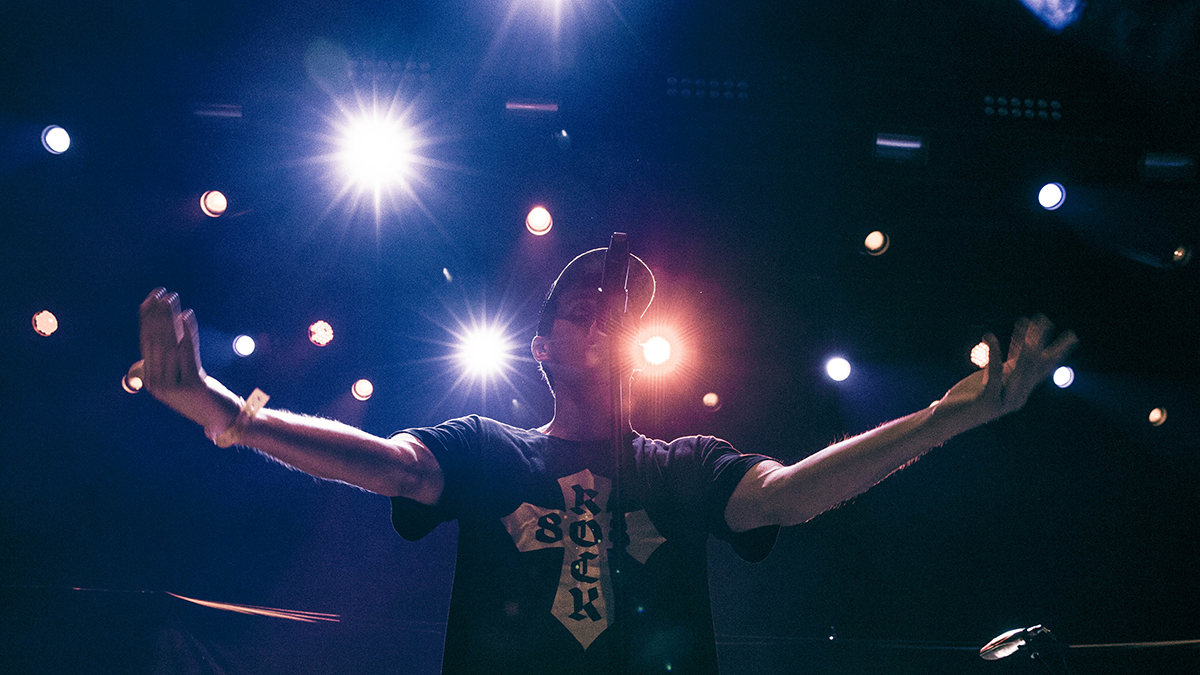 This might have been the show that made the trendy LA venue The Novo reconsider putting their stage on the third floor- every band on the bill had the ground shaking with their infectious energy. Punk music is alive and well today thanks to bands like these pushing boundaries and putting in serious work to release new music and keep fans excited.

The New York based hip-hop/punk group Oxymorrons came out the gates swinging with ripping lead guitars over everything from break beats to thrashing choruses. The group is fronted by brothers Demi “Dee” and Kami “KI” Bellevue who rap, sing, and scream with an intensity that matches their dedication. The group has been at it since 2016 and just released “Mohawks and Durags” to wide critical acclaim, defying genre much in the vein of Rage Against The Machine and Linkin Park before them. They’re big shoes to fill but Oxymorrons are up to the challenge.

Second on the bill are the rambunctious punks from Cleveland, Heart Attack Man, touring their recently released “Thoughts and Prayerz”. This new material has all the heart and grit you’d expect if you know them with an extra edge and darker tone. The title track is a thumping condemnation of the misery culture of the last few years where media are quick to point out tragedies but aren’t willing to dive under the surface to find actionable change. Singer Eric Egan belts most of his lyrics through snarled teeth and pumping fists that had the crowd full of people who admitted to never seeing them before slam-dancing and jumping along like their biggest fans. Their new track “Leap Year” was extremely well received for good reason- it’s a catchy singalong that references darker material but overall ends on an optimistic note.

Boston Manor are the first up of the two bands who flew all across the Atlantic to make this tour happen. At some point in their set singer Henry Cox pointed out how crushing it was to go almost two years without doing what they love the most, which was evident in the way they came back with a vengeance. They debuted a new song “Desperate Pleasures” set to be released on an EP titled “Desperate Times, Desperate Pleasures” and only played one track off their debut album, fan-favorite “Laika”. Boston Manor’s eyes are clearly set on the future which is refreshing in a scene dominated by late 90’s and early 00’s nostalgia. Their iconic shout vocals and dissonant guitar work absolutely electrified the venue.

Last but certainly not least were the Welsh pop-punk golden kids themselves, Neck Deep. This was clearly a deeply personal tour for at least lead singer Ben Barlow who spoke throughout the set with a vulnerability that almost made it feel like a dialogue between fans and the artist. His confessions of self-doubt and triumphs of self-realization are a big reason anyone gets into punk music in the first place- to know that even when you’re struggling you aren’t alone. Never one to hog the spotlight though, after the incredible Dani Washington finished a drum solo Ben shouted “How about one more drum solo, give the people what they want!” and Dani certainly delivered. Though they got their start churning out some of the better pure pop punk of the ’10s on albums like “Life’s Not Out To Get You”, they ensured us that “Neck Deep do what the fuck they want” and were open to growing beyond what had been a very successful formula.